The burglaries followed looting Wednesday night in Minneapolis. Some of the criminal activity extended into Brooklyn Park with a burglary at Pixie Liquors traced to the Minneapolis looting. Charges came down Friday afternoon against some of the looting suspects, including three Brooklyn Park residents.

Police in Brooklyn Center say it’s unclear if the burglaries in their city is linked to the Minneapolis looting. Brooklyn Center police, however, had extra patrols on duty.

The loss and damage at Family Dollar appears to be minimal, Flesland said. 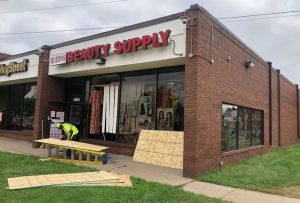 One of the Brooklyn Center burglaries occurred at Queens Beauty Supply at 58th and Xerxes Avenues North. Thieves smashed the front door making off with thousands of dollars of beauty supplies, including wigs, fake eyelashes, hair products and jewelry.

Victoria Nimely, a worker at the store, estimates the loss at about $20,000, with most of the loss coming from Brazilian human hair wigs.

“I cried this morning,” said Nimely.

Queens Beauty Supply has been in Brooklyn Center since 2015, but had been closed since March, when Minnesota had its first confirmed case of COVID-19. The store just reopened three weeks ago. 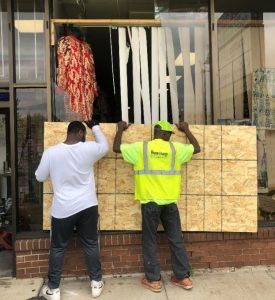 Workers board up front door of Queens Beauty Supply

“This is heartbreaking,” said store manager Daniel Afolabi. “This happened at my mom’s shop. This all she worked for her whole life.”

Nimely says the beauty shop didn’t have money to pay insurance to cover the losses because of the pandemic. The store also hasn’t received any government assistance and was behind on rent, Nimely said.

“We’re trying to establish and now this happened,” she said.

Added Afolabi, “Stealing and looting does not help anybody out, it’s only causing more hurt, more hate and more pain.”