The social unrest that hit downtown Minneapolis Wednesday night made its way to Pixie Liquors in Brooklyn Park.

“There was a boulder, probably a good 50 to 60 pounds, [they] threw it in,” said Donald Maikkula, owner of Pixie Liquors.

“They moved [the door] enough, and then they shoved some type of bar in and got the rest of the lock open, and that’s all it was,” he said.

Once they got inside, Maikkula says they grabbed several thousand dollars worth of merchandise. 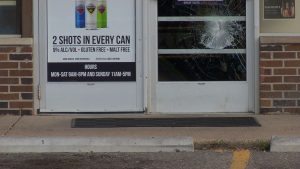 A smashed door was visible Thursday morning after people broke into Pixie Liquors shortly after midnight.

“I think the most they got away with was Hennessy and some cigarettes, and some Ciroc, couple little half pint deals,” he said.

They also grabbed a bin of scratch-off lottery tickets.

While this was all taking place early Thursday morning, a Brooklyn Park police officer happened to be driving by and noticed the burglary in progress.

“After the officer identified that there was people in the business, he attempted to stop them,” said Brooklyn Park Deputy Police Chief Mark Bruley. “They fled in the vehicle. There was four adults that fled.”

The vehicle headed west and the officer used a pursuit intervention technique about a mile and a half away to stop the car.

Police then took four suspects into custody for the Brooklyn Park burglary.

According to Brooklyn Park police, the merchandise found in the vehicle is linked to looting in Minneapolis.

“We’re very confident that it was related to what occurred downtown because some of the evidence that we found in the vehicle was identified as being looted from stores in downtown Minneapolis,” Bruley said. “So it was just a continued course of criminal conduct.”

The incident left Maikkula wondering why they had to target his business.

“It’s not the right way to change things,” he said. “They’re using whatever excuse to cause damage, to cause dismay, to cause anarchy and they’re not taking into effect what it does to people’s lives.”

Going forward, Maikkula says he’s going to beef up security on the door and buy a taser for his employees. But ultimately, he’s looking at the big picture.

“All it is, is material,” Maikkula said of the merchandise. “It can all be replaced. As long as nobody’s hurt, that’s all I really care about.”

Meanwhile, Brooklyn Park police say they plan to increase efforts to protect businesses over the next few days.

“We can’t resort to criminal conduct, even if we believe we’re supporting a cause and want to exercise our First Amendment,” Bruley said. “Nobody supports that more than the police department, but when we convert to allowing criminals to break into businesses or burn property, it is just not allowed here in the city of Brooklyn Park.”