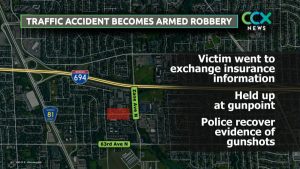 Brooklyn Park police continue to investigate an incident Sunday in which a traffic accident turned into an armed robbery.

Officers responded to the incident at 3:49 p.m. Sunday in the 6200 block of 65th Avenue. According to police, two vehicles were involved in the accident. Police say when the victim went to exchange insurance information, he was robbed at gunpoint by the occupants in the other vehicle.

That vehicle then fled, with shots fired at the victim as they took off. The victim was not injured. Police recovered evidence of gunshots.

As of Monday afternoon, no arrests had been made.