Gun violence in Brooklyn Park is at a “historic, unacceptable level,” that’s according to Police Chief Craig Enevoldsen, who addressed the city council earlier this week during a lengthy discussion on the issue.

So far this year, Brooklyn Park has 96 confirmed incidents of shots being fired. That’s compared to 102 during all of 2020. It’s a problem the police are working hard to fix, but it’s work that they can’t do alone.

“The absolute lack of cooperation that the police are getting at the scene, and in the follow-up investigations, it’s absolutely zero to limited, the cooperation that we’re getting,” Chief Enevoldsen said. “In fact, we’re usually the problem when we show up to these scenes. That makes it very difficult to hold individuals accountable for their actions. It also makes it very difficult to try to prevent further shootings.” 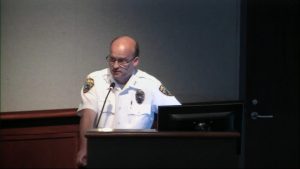 It’s a sobering admission from the Brooklyn Park police chief, but he says the city is now going to explore non-traditional methods to help curb the violence.

One tactic that began earlier this week involves partnering with civilian community members to engage and intervene with the people committing the gun violence.

Through the use of a $250,000 Hennepin County grant, the city will work with the non-profit, Minnesota Acts Now to help patrol some of the city’s most violent hot spots.

“Police are only as strong as the support they get from the community,” said Brooklyn Park Mayor-elect Lisa Jacobson at Monday’s meeting. “I believe that this community is ready to support our police, and the work that you are beginning. Every person in Brooklyn Park deserves to feel safe, and they don’t right now.”

The police chief says the partnership with Minnesota Acts Now is being funded entirely by Hennepin County, with the exception of city staff time and a vehicle.