Violent crime has been cause for concern the past two summers in Brooklyn Park, leading to an ominous statement earlier this year from the Brooklyn Park police chief.

“Quite honestly, not a whole heck of a lot has changed,” said Chief Craig Enevoldsen back in February. “And I’m scared to death of what 2022 is going to bring us.”

Wednesday at the Brooklyn Park Library, Enevoldsen joined local other elected leaders for a roundtable discussion on public safety.

“People need to feel and be safe in their homes, in their businesses, in their neighborhoods, in the schools, and they don’t right now,” Brooklyn Park Mayor Lisa Jacobson said during the discussion. “I hear from people consistently who are moving out of our city to where they might feel safer.” 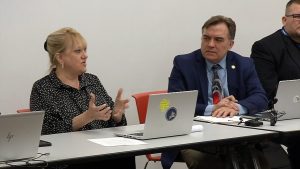 The goal is to invest in community programs, the courts, and the juvenile justice system.

Wednesday’s event was aimed at finding out what’s happening in Brooklyn Park and see where the state can invest in those financial resources.

“People have some public safety concerns where we’re at in the community,” Hoffman said. “And so it should be, no idea is a bad idea. Especially if we haven’t talked about it in the past. Rather, what does it really look like and can we achieve that?”

Sometime in the next month or so, Republicans and Democrats at the State Capitol are going to have to come together to reach some sort of compromise on their public safety plans.