Brooklyn Park Police Chief to Governor: ‘I’m Scared to Death of What 2022 Is Gonna Bring Us’

Those in attendance didn’t hold back.

“Something needs to be done,” said Bishop Harding Smith of Minnesota Acts Now, a nonprofit that works to provide a visible presence to deter crime. “The streets are flooded with guns.”

Crime in Brooklyn Park, according to Police Chief Craig Enevoldsen, is technically the lowest it’s ever been in the city. But when it comes to violent crime, he says the stats are way up.

“I’ve spoken with all three of you over the last 12 to 18 months about the problems that we’re experiencing here in Brooklyn Park,” Enevoldsen said during the roundtable discussion, referring to Gov. Walz, state Rep. Melissa Hortman and Department of Public Safety Commissioner John Harrington. “Quite honestly, not a whole heck of a lot has changed. And I’m scared to death of what 2022 is gonna bring us.” 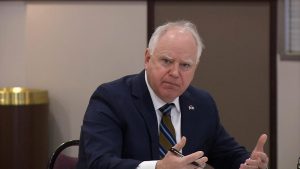 It’s a sobering reality for the police department at a time when Enevoldsen says police are not getting much cooperation from the public to help them solve violent crimes.

This was just one of many conversations the governor plans to have with local cities as he highlights a proposed $300 million funding package aimed at improving public safety.

Brooklyn Park would receive close to $1.5 million each year under this new plan to help pay for things like police recruitment, forensic science, and investment in community groups like Minnesota Acts Now.

The chief admits the money would help, but what he really wants to see is a change in the narrative that all police are bad.

“What I’m asking, and what I’ve spoken with you guys a lot about too is, it’s not money,” Enevoldsen said. “It’s simply your voice and support of law enforcement attempting to stop the lawlessness.”

Meanwhile, Minnesota Senate Republicans rolled out their own public safety agenda in January they refer to as “The Right Track.” Some of their proposals include: