On the outside, Brooklyn Center’s Pump N’ Munch looks like your basic gas station. But on the inside, you’ll find Yasmin Hernandez frantically working to fill food orders.

She’s one of the employees of Krispy Krunchy Chicken, a restaurant within Pump N’ Munch that serves as proof that people can find good food in the most unlikely of places.

“Just because it’s gas station food doesn’t mean it’s not good,” said Maya Conde, a customer from Brooklyn Park. “I mean, you have to try it for you to know if it’s good or not.” 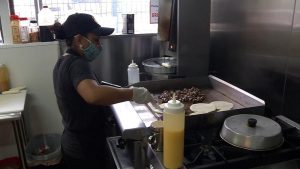 Krispy Krunchy Chicken opened in Brooklyn Center six months ago. It amassed quite the following in that short period of time.

“It’s quick and convenient,” said Derek Dreitzler, a customer from Brooklyn Center. “There’s not a lot of choices in the neighborhood, so it’s nice to actually be able to get something fresh, and that’s actually decent.”

While fried chicken may be front and center, the menu goes well beyond poultry. They serve burgers, tacos, sandwiches, and sides such as mashed potatoes, mac-n-cheese, and red beans and rice.

Unlike some restaurants, Hernandez waits until an order comes in before tossing the food on the grill or putting it in the deep fryer.

Yet the fact that the restaurant is still intact is a somewhat of a surprise to customers.

“Yeah it is surprising because they hit all of the other places,” Conde said.

“Yeah definitely, it’s nice to see that the store didn’t get tore up, actually, like a lot of the places across the street,” said Dreitzler.

The Pump N’ Munch is located right down the street from the Brooklyn Center police station where protesters demonstrated for more than a week over the police killing of Daunte Wright.

Krispy Krunchy Chicken stayed open through most of the unrest.

“The first night it all started, I came up here and a lot of the protesters were just coming and getting snack,” Dreitzler said. “Everything was actually pretty calm.”

For now, the area is mostly back to business as usual and Hernandez can keep serving up comfort food to people in a neighborhood that’s seen its fair share of stress. 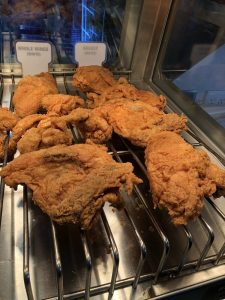