The city of Brooklyn Center is responding to a citizen group that accuses the city and the Minnesota Department of Transportation of not accepting enough input over the Highway 252 freeway conversion project.

Brooklyn Center says that’s nowhere even close to the case.

In recent weeks the City Council has met twice with MnDOT representative specifically to discuss the best way to receive comprehensive, robust and representative citizen input and engagement in the current ongoing EIS (environmental impact statement) process for the 252 highway conversion project.  We expect that the EIS process will involve very robust representative and diverse community engagement as part of that process. The Council and MnDOT have made it abundantly clear that broad, diverse community input and engagement will be paramount to making the best decision. The  safety task force was created as an autonomous body of self-selected interested residents. According to the proclamation establishing the task force it is autonomous and independent of the City. The staff has never refused and will continue to answer questions and provided information to the Task force upon request as the proclamation requires.”  –Curt Boganey, city manager for Brooklyn Center. 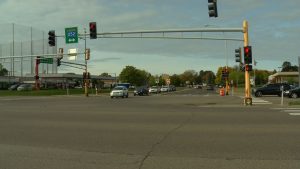 The 252 project is currently on hold. An informal survey of nearly 200 residents who live along 252 showed more than half were not in favor of making Hwy. 252 into a freeway. However, most still want improvements because 252 has some of the most dangerous intersections in Minnesota.

The proposed freeway runs from Highway 610 in Brooklyn Park to I-94/694 in Brooklyn Center. There would be three interchange locations including 85th Avenue, Brookdale Drive and 66th Avenue.