What’s Next for Brooklyn Center After Police Reform Resolution?

The city council approved the sweeping public safety reforms by a 4-1 vote. Brooklyn Center City Council member Kris Lawrence-Anderson voted no, not because she was against reform, but because she says the council hadn’t taken enough time to think the proposals through.

The council action will create new city departments. It would make a Community Safety and Violence Orevention office, which would oversee police and firefighters. The new office would also oversee two newly created departments: one on traffic enforcement and another on community response. Those two new departments would rely on unarmed professionals to make traffic stops and respond to mental health calls.

The police reform resolution was named after Daunte Wright and Kobe Dimock-Heisler, who were both fatally shot by Brooklyn Center police under different circumstances. While the council action resolves to stop similar killings, there remains many unanswered questions. Monday, Mayor Mike Elliott spoke with CCX News about what’s ahead. 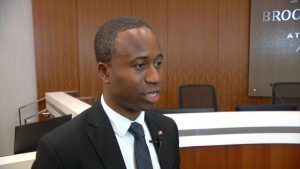 Why was it essential to pass police reform resolution?

Elliott: “Our community, over the past several weeks, through all the listening sessions that we had, made it clear, they said, enough is enough. It’s time for transformative change and in public safety here in Brooklyn Center.”

How will you implement having unarmed civilians oversee minor traffic violations?

Elliott: “The implementation committee is going to look at our traffic enforcement numbers and look at other programs around the country to look at what their numbers look like as well, and how their programs are structured, and we’re going to take the best practices from those programs. For example, in Eugene, Oregon, the CAHOOTS program has been successful for so many years now. They get something like 27,000 calls per year. Only about one percent of those calls needed police backup. Very successful program. I think they were able to save somewhere between $8 and to $9 million a year for their public safety costs.”

How would unarmed civilians respond to mental health calls?

Elliott: “We would have a dispatch system, much like we currently have. When a call comes into dispatch, that dispatcher determines whether it’s a call for an ambulance or fire truck, or law enforcement, and they’re making sure the appropriate department responds. We’re going to add to that. So, that dispatcher now understands the situation and accesses it. We need the mental health response unit to go to this call.”

Mayor Elliott says the city is getting to work right away. The first item on the to-do list is selecting members who will serve on the implementation committee.