Abby Anderson’s senior year at Wayzata High School will be memorable for a number of different reasons.

She made the big decision to attend a performing arts college in Chicago next fall, and she was preparing for a role in the Midwest regional premier of the musical, “Something Rotten!” at the Blue Water Theatre Company in Wayzata.

“The rights had just come out and we were the first theatre company to obtain the rights,” Anderson said. “So we were in the middle of that.” 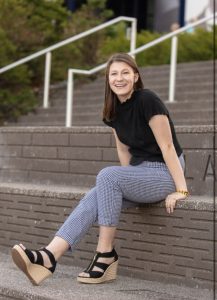 Abby Anderson is a senior at Wayzata High School.

Then, something rotten happened to “Something Rotten!”

The novel coronavirus pandemic hit the United States, which canceled the musical and put the rest of Anderson’s senior year in a state of flux.

“It’s just disappointing. I love theatre so much and I love performing and I love being on stage,” Anderson said. “So it’s hard to think that I can’t be in that space now for a long time.”

Yet despite some of the unfortunate developments caused by COVID-19, 2020 hasn’t been a complete disappointment for Anderson.

“The Only Star I Remember”

In January, a play that Anderson helped to write and direct with her friend, Carly Joseph from St. Louis Park High School, made its big premier at the Blue Water Theatre Company.

“We had both been in a program called Witness Theatre, where you actually preform with Holocaust survivors as they’re on stage with you,” Anderson said. “And we wanted to do something like that at Blue Water.”

That experience led Anderson and Joseph to develop, “The Only Star I Remember,” a play centered around the experiences of Esther Begam, (Anderson’s great-great grandmother), during and after the Holocaust. 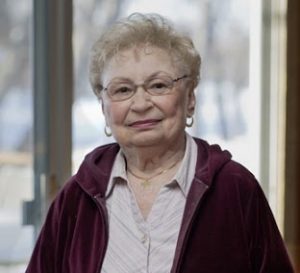 “The Only Star I Remember” is a play based on the experiences of Holocaust survivor Esther Begam.

“It was really hard cause we both had to navigate school and extracurricular activities,” Anderson said. “It took us a lot of meetings. We had to watch a lot of videos of my grandma, and it was hard when we had questions. We felt like we couldn’t really go to her because we didn’t want to bring up any bad memories.”

Begam is now 91-years old and has a hard time talking about her Holocaust experience in her advanced age. “She has nightmares,” Anderson said. So instead of asking Begam to recount the traumatic experience, the two students watched an interview conducted in the 1990s by an assistant of film director Steven Spielberg.

“He was going around interviewing everybody for the Steven Spielberg Shoah Foundation,” Anderson said. “And we have a video of the interview that they did with my great-grandma and my great-grandpa, where they just talk about their entire story and their entire experience. So we watched that and we took notes on that.”

Those videos, combined with research Anderson had previously done on her great-grandmother for various school projects, gave the two enough material to develop the play.

And after more than a year of researching, writing and rehearsals, “The Only Star I Remember” made its big premier at the Blue Water Theatre on Thursday, Jan. 23.

Telling a story about a significant historical event is no easy task. But for Anderson, she felt added pressure because the story involved a relative. That meant, it’s something her entire family would want to watch.

“The hardest part was just wanting everything to be as accurate as possible, and there are some things that you just can’t put on stage, that you can’t translate on the stage,” Anderson said. “I cried about that a lot. I just wanted everything to be accurate, and I wanted my family to feel represented and to feel proud of what was happening on the stage. So that was really difficult.” 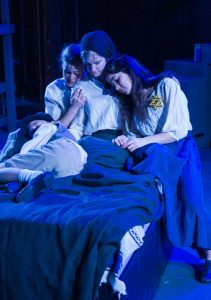 Production photo of “The Only Star I Remember.” From left to right: Harry Long, Caelan Petit, Lily Miller and Sofia Sanchez.

In the end, their hard work paid off. The show did so well that the Blue Water Theatre decided to add a fourth show after the initial three performances sold out. Anderson said the audience was moved by the play and learned something in the process.

However, the experience was much more than a résumé builder for Anderson. For her, it was also about telling an important story to help ensure there’s not a repeat of the Holocaust.

“It can happen again with anybody,” Anderson said. “Like the events happening in America today with people being detained and kept from their families and separated, it’s exactly what happened to my great-grandma back in Nazi Germany. It doesn’t start with death camps, it starts with little bits of dehumanization, it starts with ignorant hate speech.”

While the last performance of “The Only Star I Remember” occurred back in January, Anderson says there’s a possibility they’ll be able to reformat the script and sell the rights in order to make it into a play that anybody can perform. Unfortunately, the COVID-19 pandemic is making that process difficult because her and her team can’t meet.

“We can’t walk about how we want to reformat the script, what we want to take out, stuff like that. It’s just way more complicated now,” Anderson said. “But hopefully once quarantine ends, I don’t think it will take that long.”

That’s one thing for her to look forward to when the world gets back to normal. The other thing on the horizon for Anderson is starting school in the fall at the Chicago College of Performing Arts at Roosevelt University (assuming that classes will still take place).

“Ultimately I just love to perform. That’s what I want to do with my life,” she said. “And hopefully, that will be what’s next for me.”