Winter may have arrived a little early this year, but it’s never too cold for ice cream, at least that’s what the owners of Two Scoops in Osseo are hoping.

On Friday afternoon, the city of Osseo celebrated the grand opening of Two Scoops, a new ice cream shop along Central Avenue. It’s a family-owned business with another location in Anoka that opened 10 years ago.

Two Scoops serves more than 100 flavors — courtesy of Wisconsin-based Chocolate Shoppe Ice Cream — that rotate in and out, depending on the season.

They initially had plans to open the store this past spring, but COVID-19 forced them to delay those plans. 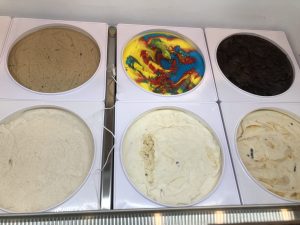 Some of the ice cream on display at Two Scoops in Osseo.

“It was the main street area. It had that small town feel to it,” said Rick Ritter, the co-founder. “When we initially started looking here, everyone we met from Osseo was so friendly. So nice, so kind.”

“When the Osseo Meat Market was on Main Street, they had ice cream,” said Osseo City Council Member Larry Stelmach. “And when they moved, the ice cream left and people have been wanting ice cream ever since. So this is a huge win for the town.”

For now, Two Scoops will only be open Friday through Sunday, but come March, the plan is for the store to be open every day of the week.