The year 2020 may have been the year of COVID-19, but it was also a year of transportation projects that will shape the northwest suburbs for years to come.

In Brooklyn Park, crews completed work on a $30 million interchange at Highway 169 and 101st Avenue aimed at stimulating more economic growth in the northwest corner of the city and handling the transportation needs that come with new businesses moving in.

“We talked about it for years and now it’s done,” said Kent Barnard, MnDOT spokesperson. “And it’s almost like a sense of relief that we’ve gotten another project out of the way, and especially in the case of this project, this is going to be such a boon for the businesses and the commercial area up here and for traffic up here in this area.”

Also in Brooklyn Park, a stretch of Bottineau Boulevard between Brooklyn Boulevard and 83rd Avenue that had been closed since March reopened in late November.

When it was all said and done, Hennepin County added lanes, new curbs and new trails for pedestrians and bicyclists.

“It’s been a long spring and summer for the motorists, but we got it all done and we thank the people for their patience,” said Stanley Lim, a Hennepin County construction engineer.

Patience is apparently something that was lacking for drivers on a stretch of I-94 in Maple Grove where crews resurfaced pavement on the eastbound side of the freeway and redirected traffic to the westbound side.

MnDOT officials report that on a nine-mile stretch between Maple Grove and Rogers, 103 crashes occurred between July 1 and Sept. 30, many of which were the result of driving errors.

“Driving through whatever work zone, including this one, you just need to drive with care,” said Dave Aeikens, a MnDOT spokesperson. “Reduce your speed. Pay attention. Not follow too closely to the car in front of you.”

That’s not the only place where drivers weren’t following the rules of the road.

In Robbinsdale, Hennepin County shut down the southbound bridge along West Broadway Avenue due to continued violations of weight restrictions.

All traffic was shifted to the northbound bridge and re-striped to a single lane in each direction.

The realignment will remain in place until the county replaces the bridges, but construction won’t start on that project until spring.

Speaking of realignment, the long-approved route of the Bottineau Light Rail Line was scrapped this past August.

The Metropolitan Council and the corridor management committee concluded that they wouldn’t be able to persuade BNSF Railway to sign off on a deal that would allow light rail trains to ride alongside eight miles of freight trains. 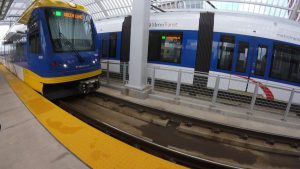 The Met Council will look at options for a new route for the Bottineau Light Rail Line.

“There was a business rationale that BNSF has consistently said that co-location with transit does not benefit, in fact, it impedes their business strategy,” said Charlie Zelle, chair of the Metropolitan Council.

An alternative route to the Bottineau Light Rail project is still up in the air, but over the next six months or so, the Met Council and Hennepin County will look at various options.