Construction of the new 101st Avenue interchange at Highway 169 continues. This week daily lane closures took effect on 169 between Highway 610 and 109th Avenue in Brooklyn Park. Drivers should prepare for single-lane traffic in both directions between 6:30 a.m. and 7 p.m through June 26. 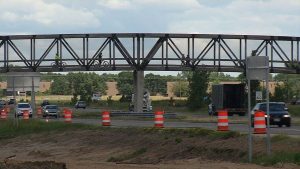 “We’ve had crews moving the equipment in and out of the work zone,” said Kent Barnard, spokesperson for MnDOT. “We’re starting work on the bridge piers for the new bridge that will carry 101st traffic over Highway 169.”

This cone zone, like others across Minnesota, is an outdoor office for road crews. MnDOT advises people to pay attention, slow down and never enter a road blocked with barriers or cones.

“You have to remember that this is a work zone,” Barnard said. “There is going to be people moving around in the work zone. They may not necessarily ever get out into your path, but we do want to be careful there. Also trucks moving in and out, bringing materials and equipment in and out throughout the day.”

Interchange Should be Finished This Fall

This interchange project should be finished this fall, said Barnard. He says there is still plenty of work to be done. 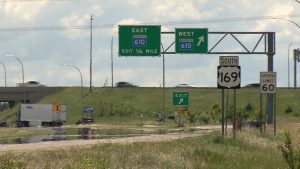 “We haven’t gotten a lot done,” Barnard said. “We’ve done a lot of earth work up here. We’ve closed the exit ramp from northbound Highway 169 into the church. We do have 101st Avenue closed right now. But the big part of the construction is coming up with the bridges and working on the loops and the ramps here at 101st.”

Brooklyn Park has wanted the interchange for many years. It’s a massive project and should foster job growth in the city.

“It’s a really big job and it’s really important for the city of Brooklyn Park,” Barnard said. “They’re looking at future construction and further economic development up here. It’s also going to be a safety issue too. It will lessen some of the congestion in the future.”

The new interchange is supposed to improve safety and traffic flow in Brooklyn Park, Champlin and Maple Grove.

Construction of the new interchange began this spring. For traffic and travel information in Minnesota, visit 511mn.org.