No happy hours. Few, if any, business meetings. And a 50 percent limit on customers. It’s certainly been an unnerving time for taprooms.

Under Pressure is fresh off celebrating a two-year anniversary Friday and Saturday. Getting to that celebration hasn’t been easy, having survived not one, but two temporary business shutdowns because of COVID-19 restrictions. The first took effect March 20 and lasted until June 10. The second shutdown started Nov. 21 and ran until Jan. 11.

“We’re extremely happy to still be here,” said Ertl. “The first shutdown, a complete surprise, who thought the world would shut down like that, but at least we were moving into warmer temperatures. We could be outside. We could be on the patio. So that wasn’t as bad. This [second] shutdown was absolutely awful.”

What is usually a fun atmosphere that’s fitting of the brewery’s medieval theme, Ertl has had to rely on growler and crowler takeout sales, and a small, but loyal customer base.

“They continue to keep coming back, supporting us wonderfully. We can’t thank the community more for helping us through these situations. I mean, it’s just been awful and they’ve been here rallying us and supporting us,” said Ertl of her customer.

Since Under Pressure doesn’t supply to liquor stores or restaurant, it relies solely on in-house sales. 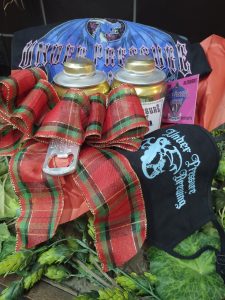 “We wanted to be community oriented, we wanted people to come in and gather with family and friends, put down their cell phones and play games and talk,” Ertl said.

At Blue Wolf Brewing in Brooklyn Park, owner Mike Campbell significantly altered his business plan due to the pandemic.

“We were a taproom-only operation for almost three years now,” said Campbell. “Due to COVID, we started doing more with crowlers.”

Campbell obtained a wholesale license so his business could distribute crowlers, the meaty cans holding 750 milliliter of beer, and 16-ounce cans to liquor stores.

“We have gone from the taproom where you can come in and sit down and order a pint and maybe get a crowler to go to a production brewery whole-sale operation that just now happens to have a taproom,” he said.

He hopes the change will help his business weather the COVID storm.

“What we’re using it for right now is more like advertising. It gets our name in front of people that maybe have never seen us before,” said Campbell.

Campbell didn’t reopen his taproom until last week to account for the change.

“A lot of these smaller breweries that I’m familiar with, particularly in the northwest suburbs, have started doing wholesale in liquor stores. They’ve had to change. They’ve had to pivot,” he said.

Since Blue Wolf Brewing is doing small-scale distribution, Campbell says his business is doing mostly everything by hand, from labeling to the seaming and filling of the can, which is costly in it own right.

“It is what we’ve had to do to hopefully at least break even, bring some money in, or maybe make a few dollars, but it’s not going to be enough. I couldn’t run my whole business this way. I need to have the taproom,” he said.

His customers are glad to have the taproom back.

“With this covid situation, he’s gone out of his way to make sure it’s a safe bar to come to,” said customer Brian Richards.

Back at Under Pressure, Ertl says she’s “trying to do things a little usual in unusual circumstances.

“We just feel like it’s truly wonderful that we’re still here. Hopefully, next year also, and the following years after that.”

Rasmussen University Opens New Brooklyn Park Campus:  From the outside, a new building located along… Read More
Zanewood Rec Center Starts a Chess Club:  Chess is played worldwide by all kinds of people of all… Read More
Six File for Three Seats on Osseo School Board:  In the race for three seats on the Osseo School… Read More
Seven File for Four Robbinsdale School Board Seats:  Seven candidates have filed to run for four seats… Read More
Brooklyn Park Police Investigate Shooting At Norwood Park:  Brooklyn Park police are investigating a… Read More
Stretch of Highway 55 in Plymouth Will Receive Upgrades:  A stretch of Highway 55 near the Station 73… Read More