Steady Stream of Voters as Polls Open in Brooklyn Park

Every four years, Americans come together to exercise their civic duty and vote for the highest office in the land.

And at the Edge Christian Worship Center in Brooklyn Park, a steady stream of voters took advantage of that right as soon as polls opened at the church-turned-polling place.

Montero says Brooklyn Park has more than 47,000 registered voters, 23,000 of which voted early. 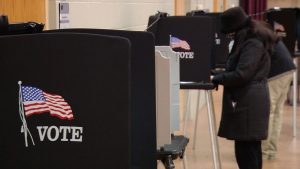 Voters were lined up right when polls opened at 7 a.m. at many polling places around Brooklyn Park.

But for some, there’s nothing like voting on the day of the election.

“Usually I do vote on Election Day, so that is my tradition,” said J. Samuel Subramanian of Brooklyn Park.

“Even with the pandemic, I didn’t think it was really important for me to vote early this year,” said Jenny Neumann of Brooklyn Park. “I just thought I would just wait for normal Election Day, and thank god the weather was nice for us to be outside just in case.”

For voters, Election Day marks the end of a vicious and drawn-out campaign season that began well before 2020.

Challenges brought upon by COVID-19

And for election officials, it marks the end of grueling process, made even more complicated with COVID-19 thrown into the mix.

“You’re planning the election juts like you’re planning a wedding,” Montero said. “You know you’re getting everything prepared, making all the appointments, all the polling places together, hiring election judges, and it’s a long process.”

Montero says hiring election judges was a complicated process in itself, with many dropping out over fear of the coronavirus.

“Remember a lot of our election judges are a lot of seniors,” he said. “The average age is about 72, so there are some concerns.”

Fortunately, people like Brad Meyers stepped in to fill that role.

“I just wanted to help out our community,” Meyers said. “I enjoy helping out the community, doing, you know, whatever’s needed.”

For Meyers and some of the other poll workers, Election Day ends up being a 16-hour day.

But it’s a labor of love to ensure that everything runs smoothly, and every vote is counted.

Whether the voters want to stay up to learn the results, however, is another matter altogether.

“Yeah I’m going to sit in front of my TV the whole night,” Subramanian said.

“I don’t think I will be glued to the TV for election results, maybe for more entertaining things,” Neumann said.