With less than two weeks until Election Day, many city clerks are reporting high numbers of ballots already cast by registered voters.

Sorting of absentee ballots started on Tuesday, although the actual vote tally won’t be known until after the polls close on November 3. This year, the process is earlier because the state legislature changed the law due to increased early voting due to the coronavirus pandemic.

City clerks started work early preparing for a historic election. Many cities even set up tents outside city halls to accommodate the number of voters who wished to hand in their ballots early.

In Brooklyn Park, city clerk Devin Montero reports numbers are almost double what they were four years ago.

“At the November 2016 Presidential election, the total for early voting was 8,782. As of today, 15,837 voters have already voted early,” said Montero. In Brooklyn Park, voters will elect three council positions.

Almost Half Of Registered Voters In Golden Valley Have Cast Ballots

People are flocking to Golden Valley City Hall to vote early too. Residents will elect three positions on the Robbinsdale School Board, as well as several state and federal offices.

According to Golden Valley City Clerk Theresa Schyma, currently, 8,361 ballots have been accepted, either in-person or through the mail, which means 49 percent of registered voters in Golden Valley have already cast their votes. 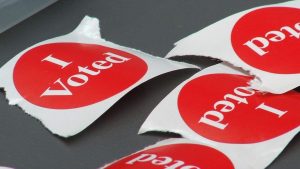 “Another difference is that absentee voters who received their ballots in the first few weeks of absentee voting are filling them out and turning them in the same day,” said Schyma.

In previous years, she also said that many voters who received their ballot in-person at City Hall in late September or early October would take it home to have more time and return it later. But this has not been the case this year, as only a handful of people decided to take their ballot home with them to be returned later.

Half of Registered Voters In Plymouth Have Already Voted

“This is a historic election with the record-breaking turnout for early voting,” said Plymouth City Clerk Sandy Engdahl. “It has been less than five weeks since absentee voting began – and Plymouth is already at 48% voter turnout. That compares to the 2018 and 2016 elections, which both had an approximate 38% early voter turnout in the entire six weeks of early voting. We’re excited to see so many residents take advantage of the early voting options available to them.”