The Minnesota State Patrol is investigating a semi truck crash that happened early Thursday morning on eastbound Interstate 94 near the interchange with Interstate 494 in Maple Grove. 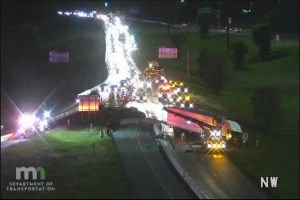 Semi was carrying about 43,000 pounds of fruit

According to the State Patrol, the crash occurred shortly before 4 a.m. The semi was carrying about 43,000 pounds of fruit when it jackknifed and tipped over. The accident forced the State Patrol to close eastbound I-94 for nearly five hours to clean up the highway. It caused a traffic backup for miles as troopers detoured eastbound traffic south on I-494.

I-94 reopened shortly before 9 a.m.. No one was injured in the crash. There’s no word yet from the State Patrol on what caused the semi to crash.