UPDATE: this story was updated March 19, 10:13 a.m. to include identify of victim

Authorities on Thursday morning released the name of the woman who investigators say was struck and killed by a school bus driver on a bus carrying school children. The Hennepin County Medical Examiner identified the woman as Devon Lizbeth Doherty, 45, of Brooklyn Park. 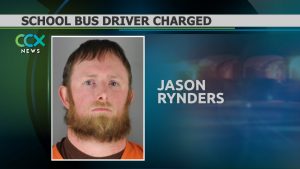 The incident happened Monday at about 6:50 a.m. near the intersection of Humboldt Avenue and Meadowood Drive in Brooklyn Park. Doherty was pronounced dead at the scene.

When authorities arrived, they were contacted by a man who was visibly upset. According to the criminal complaint, the man told police he was driving to work when he saw a school bus stopped on the right side of Humboldt Avenue. He then felt his car hit something in the road. That’s when the man noticed a woman lying in the road.

Detectives with the Brooklyn Park Police Department and the Minnesota State Patrol eventually located the school bus. Authorities say a preliminary analysis of the crash indicated that Doherty was hit by the front of the school bus and then again by the front axle or rear tires, or possibly both.

Surveillance footage from a nearby homeowner captured part of the collision and aftermath. The video shows a bus turning onto Humboldt. The collision and sound of a voice is also heard. The video also shows the bus driver leaving the area in the bus, which appeared to be occupied by children, the complaint said.

The suspect, Rynders, was a driver and trainer for Maple Grove-based Northstar Bus Lines. Authorities retrieved the bus SD card, which stores bus camera footage. The footage shows the bus appearing to “shudder” or hit something. The complaint says the cameras show the defendant pull over and get out. Several children were dropped off about a half hour later at Friendship Academy, a Minneapolis charter elementary school.

If convicted Rynders faces a maximum sentence of 10 years in prison.