Locally-owned restaurants are hard to come by in the city of Plymouth. But for more than five years, Rock Elm Tavern has served that role. During that time, it’s become a popular gathering spot for the community.

“People would walk in and they’d know people, like ‘Hey, how are ya? How are ya?’ Very Cheers-like I guess,” said Troy Reding, one of the owners of Rock Elm Tavern.

At least that’s how what the scene was like before the pandemic. After COVID hit, owner Reding says they tried to adapt to the new normal.

“We did parking lot parties, we did smoked meats, we sold retail stuff,” Reding said. “I mean, anything we could think of. We tried to do take and bake meals, and after eight months of doing that, we were tired.”

They were so tired that in December, they decided to shut down altogether, both at the Plymouth location and at their other venue in Maple Grove.

“With it being winter, it made more sense to shut it down and lose less money by shutting down, quite simply,” Reding said.

With the lease expiring in Plymouth at the end of February, the future of their original restaurant as uncertain.

But funny things can happen when a restaurant becomes an important community staple.

“We received emails and phone calls and texts, and everything from people going, ‘Who’s your landlord, we want to write a letter. We want to talk to them. We want them to know how important you are,’” Reding said. 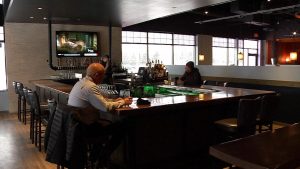 This week, Reding announced they extended their lease, meaning that they’ll stay in Plymouth for at least the next five years.

The Maple Grove location, meanwhile, will reopen in March under the name, Rock Elm at The Grove with a menu twist and décor upgrades.

“Without the community support, we wouldn’t have pushed as hard as we did,” Reding said.

However, that’s not the only good news for Rock Elm Tavern.

Reding says that Rock Elm Tavern will be the official food and beverage provider at Optimal Performance Golf in Maple Grove, which opens in March. The company says the venue will have Minnesota’s largest indoor short game area with eight golf simulators and a 2,700 square foot putting green.

With patio season on the horizon, optimism abounds for life after the pandemic.

“Restrictions will lift, hopefully, this spring and people will be able to get back to celebrating family and celebrating good times,” Reding said.

Rock Elm Tavern will also launch a food truck in the spring.