A restaurant with locations in Maple Grove and Plymouth is putting its operations on hold, pinning its decision on the pandemic.

Rock Elm Tavern made the announcement just before Christmas. It’s owned by Troy Reding and Brad Sorenson under the company name Ally Restaurants, which also operated a third establishment called Holman’s Table at the St. Paul Downtown Airport. The owners say that venue will remain closed until COVID-19 dining restrictions are fully lifted.

Reding and Sorenson say the Maple Grove location will be closed until March, when they plan to reopen with a “new name and feel.” The Maple Grove venue opened in 2018. 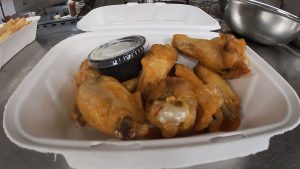 Rock Elm Tavern had been trying to survive on takeout.

Meanwhile, the Plymouth location, which opened in 2015, faces an uncertain future. The owners say their lease in Plymouth expires at the end of February and are actively negotiating the terms, while exploring options for a new location. The last takeout service was Dec. 22 and the restaurant will remain closed until further notice.

“We’ve worked extremely hard, tried so many new things, and will come out of this stronger than ever before,” said Reding in a statement on the Rock Elm Tavern website. “The restaurant industry is forever changed and scarred by this. But we’re resilient people, and can find hope in what’s to come.”

Dining indoors remains off limits at restaurants through at least Jan. 11 due to COVID-19 restrictions put in place by Minnesota Governor Tim Walz.

Ally Restaurants also co-owned Sugar & Spice Sweetery with local cake artist Dawn Olson-Wallerus. The Sweetery opened six weeks before the global pandemic. The owners say it was having “great success until COVID hit” and had to close four months later.

Rock Elm Tavern in Plymouth plans to run a smoked meats pop-up on New Year’s Eve from 10 a.m. to 4 p.m. Guests can stop by in the parking lot and get brisket, turkey, prime rib, ham, sides and beer. The owners also say to watch for a ghost kitchen out of the Maple Grove location.

“We’ll linger, and pop back in from time to time. Most importantly, we’ll be back,” said Sorenson.