It’s the middle of December, but some local restaurants and bars are opening their patios this weekend. Minnesota Governor Tim Walz announced on Wednesday that eating establishments, bars and taprooms could open their patios. Wicked Wort Brewing Company in Robbinsdale is taking advantage of the opportunity to bring in more business.

The Wicked Wort Brewing staff are cleaning off the tables and chairs, getting ready to open their patio for the first time in weeks. They have several fire pits and heaters in the outdoor space. 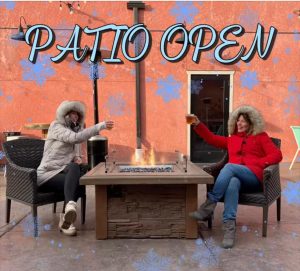 “We’re from Minnesota, so sit outside and drink a beer, ” said owner Steve Carlyle, who says there’s plenty of craft beer to go around.

Under the Governor’s executive order, bars and restaurants can open the patio for up to 100 people or at 50 percent capacity. Tables are limited to four people, and they have to be spaced six feet apart.

Carlyle says business suffered during the first and second indoor dining shutdowns. Some workers were laid-off. The company also lost money on live music events and parties. Wicked Wort Brewing changed its business model to cut down on utility costs.

“The lights are off. The units are shut off at night. We do everything we can to shut this place down. It’s black here at night,” explained Carlyle.

The family-owned brewery hopes the lights and laughter return this weekend as people come out to the popular taproom.

Pig Ate My Pizza in Robbinsdale and Luce Line Brewing in Plymouth also plan to open their outdoor spaces.