There’s now a reward offered for information that helps catch two people who set multiple fires in April at a strip mall in Brooklyn Park.

The Bureau of Alcohol, Tobacco, Firearms and Explosives is offering a reward of up to $5,000. The agency released photos of two people with gasoline containers, pouring a liquid throughout the businesses at 3200 Brookdale Drive North. An ATF fire investigator determined the fires that damaged De Armour Nails, Kelly’s Diamond Realty and Top 2 Bottom Fashions were all the result of arson. 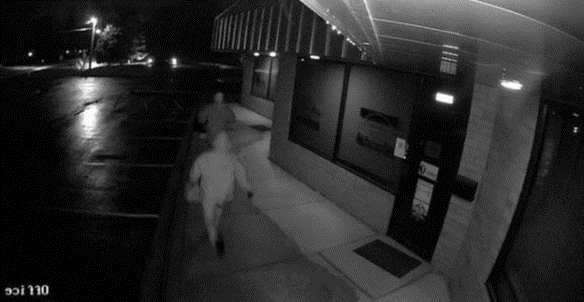 The fire happened early on the morning of April 19. Fire crews on the scene later in the morning said it was a fast-moving fire that could’ve been worse if not for the building’s sprinkler system. Employees cleaning up expressed frustration, and investigators suspected arson early in the investigation.

“This is a clear act of arson,” said ATF Acting Special Agent in Charge Jon Ortiz, of the St. Paul Field Division, in a press release. “The challenge now is to determine who these individuals are, which is why we are reaching out to the public for information. We encourage folks who may know these individuals or details surrounding the incident to call ATF.”

Anyone with information about this incident or identification of the individuals involved is asked to contact ATF.

Those with tips about the crime can call 1-888-ATF-TIPS (1-888-283-8477), email ATFTips@atf.gov or submit information anonymously via www.ReportIt.com or the Report It mobile app, available on Google Play or Apple Apps Store. When using Report It, select “ATF – St. Paul Field Division” as the reporting agency.

Authorities urge people with tips to provide as much information as you can relating to the identity and whereabouts of these individuals. Information can be submitted anonymously, but if a reward is sought, be sure to include contact information. Information eligible for reward must lead to the arrest and conviction of an individual.