Shards of broken glass and plywood in place of doors greeted employees of a strip mall near the intersection of Brookdale Drive and Xerxes Avenue when they arrived at work Monday morning.

“It’s just crazy man,” said Anthony Winfrey, who works at the Domino’s Pizza in the strip mall. “Like at the end of the day, these are people’s businesses.”

Winfrey’s workplace was spared, but De’Amour Nails, a nail salon located next door, wasn’t as fortunate.

Investigators say that around 1 a.m. on Monday, an arsonist broke into the nail salon and started a fire, damaging furniture and other equipment in the process. A total of five businesses had their doors smashed in and three sustained some level of fire damage. 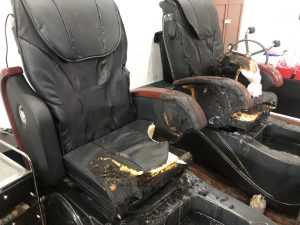 Furniture damaged in a fire at De’Amour Nails in Brooklyn Park.

“It seems like it was a very fast-moving scene prior to the arrival of the first responders,” said Brooklyn Park Fire Marshal Dan Krier.

Krier is leading the investigation in conjunction with several other agencies.

Krier says the damage could have been worse in the nail salon and the other businesses had it not been for the building’s sprinkler system.

“It helped control that fire,” Krier said of the sprinklers. “Minimized damage and minimized any spread to the adjacent units that most of them are probably open and operating today.”

Investigators are still trying to determine who the suspects are, how they started the fires and their motivation.

For the businesses that are still operating, they hope that they won’t see any similar incidents during this time when the Twin Cities are on high alert.

“Everybody says support local businesses, and they say support black businesses,” Winfrey said. “Well, half of these places are black-owned business. What are you doing?”

Investigators say that anyone with any information should call the Minnesota Arson Hotline. That’s 1-800-723-2020.