Monday, April 19 on the House floor of the Minnesota State Capitol in St. Paul, members of the state legislature paused to pay their respects to Walter Mondale — a senator, vice president, presidential nominee, and above all else, a Minnesotan.

“He was always good to us,” said Rep. Ryan Winkler, DFL-Golden Valley.

Winkler is just one of many residents of the northwest suburbs who Mondale touched over the years.

“This state certainly has produced some incredible people, you among them,” Barry ZeVan told Mondale in December of 2017.

On that winter day, Mondale visited the CCX Media studios in Brooklyn Park for a sit-down interview with Barry ZeVan. It was an opportunity for Mondale to reflect on his life and political career on the show, “fyi with Barry ZeVan.” 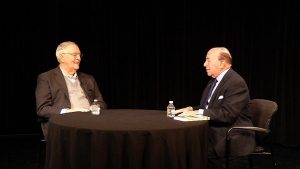 Walter Mondale spoke to Barry ZeVan in December of 2017.

“A lot of my life has been spent trying to live the law in the Senate, in the Vice Presidency, and in politics,” Mondale said to ZeVan that day. “I think it’s the basis of our civilization. It’s what, I think, above all, holds us together. And we better not forget it.”

Mondale himself is a person that many Minnesotans will never forget.

Known to everyone as “Fritz”

“’Fritz,’ and everybody called him Fritz because we loved him so much,” said Diane Sannes of Brooklyn Center.

Sannes attended the 1984 Democratic National Convention and amassed a large collection of political campaign buttons from that era.

In 2012, she had the opportunity to show Mondale those buttons. 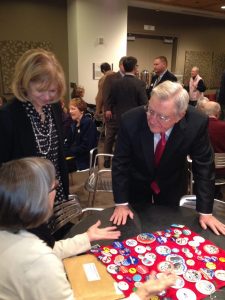 Diane Sannes shows off her collection of buttons to Walter Mondale.

“Oh he was thrilled, because he saw some of those buttons, which, you know, he didn’t get to see buttons at the time,” Sannes said. “So he was glad. He got a kick out of seeing all those buttons and remembering those times.”

Mondale wasn’t the only person who got a kick out of remembering the old times.

“I got to know him quite well,” said Lyndon Carlson, a former state representative from Crystal.

Carlson served in the legislature for 48 years, and he crossed paths with Mondale on many occasions over the decades.

“When I was successful in 1972 in running for re-election, the very first phone call I received was from Fritz Mondale,” Carlson said.

Carlson says that interaction was typical of the former vice president’s personality.

“He was always more interested in other people than talking about himself,” Carlson said.

Mondale was a figure that loomed large in Minnesota, and he leaves behind a legacy as an influential force in American politics.

The family of Walter Mondale announced on April 23 that they’re planning public memorial services for the former Vice President in September, both in Minnesota and Washington, D.C.