Remembering Walter Mondale: ‘He Had Such a Heart for the Country’

Walter “Fritz” Mondale was a giant of Minnesota politics: a former Minnesota attorney general, a U.S. senator, a vice president. But many also describe him as a “humble servant.”

Mondale died Monday of natural causes. He was 93.

Lawmakers from northwest suburbs shared personal stories about Mondale. Ryan Winkler, DFL-Golden Valley, says he drove Mondale around when Mondale stepped in to run for U.S. Senate following the tragic plane crash of Paul Wellstone in 2002.

“One of the most touching moments in politics I’ve experienced is his concession speech to Norm Coleman, in which he thanked the voters of Minnesota for always being good to him,” said Winkler during a speech on the Minnesota House floor Monday.

Sannes traveled to the 1984 convention with several other north metro residents when Mondale ran against President Ronald Reagan.

“After Sen. Wellstone died in 2002, he said ‘I will run,'” said Sannes about Mondale. “Of course he didn’t win. He always did things and he didn’t have to, but he did. He had such a heart for the country.”

Sannes got to show her buttons to Mondale in a 2012 event at the Minnesota History Center. 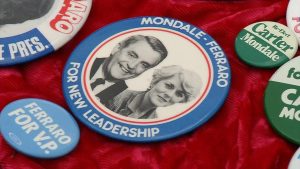