If you visit any movie theater, the aroma of popcorn permeates throughout the lobby. But no local theater will have a popcorn menu as extensive as the New Hope Cinema Grill.

“It’s so unique and fantastic and the flavors are so good,” said Jennifer Mather of Brooklyn Park.

On Valentine’s Day, the Cinema Grill launched a new partnership with Zack Redmon, (owner of Redmon’s Popcorn), whose menu consists of dozens of delicious flavors.

It’s a marriage that was meant to be.

“I’m happy that I got to get in a space that I’m comfortable in and I’m around people that I’m really comfortable with,” Redmon said. “And then on top of that, I didn’t give up on a dream that not only me, but a lot of people believed in.”

For the last year, Redmon operated out of a small office suite across the street. He quickly outgrew the space, thanks in large part to comedian Stephen Colbert.

Colbert highlighted Redmon’s Popcorn on “The Late Show with Stephen Colbert” last fall and people flocked to New Hope to get a taste.

However, the segment drew the attention of the county health department. They told Redmon that he needed to make his popcorn in a commercial kitchen.

“He kind of gave me this idea that he had that he wanted to have a Cold Stone-style popcorn shop,” said Pack, owner of the Cinema Grill & Outtakes Bar. “You know, and I’m like, well here’s the space, bro. Let’s do it. Let’s put it together.” 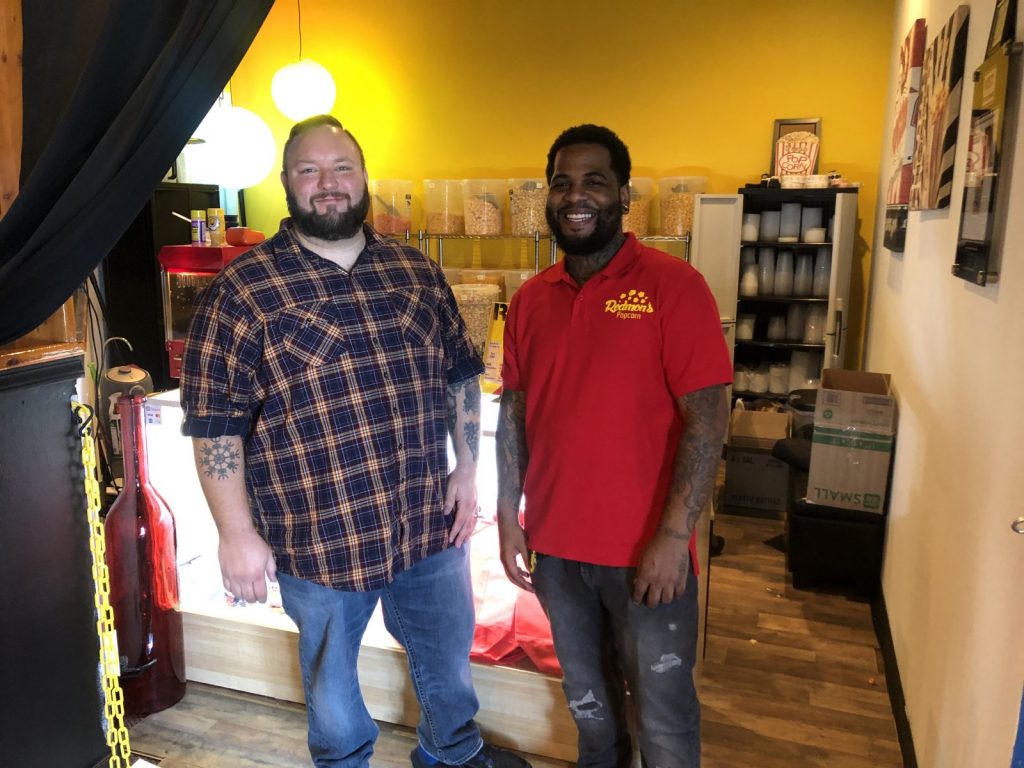 Cinema Grill owner Zach Pack stands with Zack Redmon in front of the new home of Redmon’s Popcorn, located inside the Cinema Grill.

Longtime fans of Redmon’s Popcorn expressed their excitement over this new partnership.

“I cannot believe I am the first customer,” exclaimed Mather, the customer from Brooklyn Park. “I tried to get here a few minutes early just in case it was busy, and my brother in law is going to freak out once he finds out I was the first customer.”

Redmon once sold popcorn out of the trunk of his car. But after a year of ups and downs, he’s now in what’s possibly the best spot a popcorn man could ask for.

“I’m just happy all in all. I feel whole. I feel complete,” Redmon said. “I feel like, what’s the next thing? What’s going to be the next big move?”