New Hope’s Winnetka Professional Building is home to a number of small businesses. But none are quite like what you’ll find in unit 150 B.

“I’ll just get a whiff of some popcorn, cause he gets that popcorn machine going and it’s just like, ooh, he’s here,” said Tasha Anderson, who runs a business in the building.

The man responsible for that delectable aroma is Zack Redmon, the owner of Redmon’s Popcorn, which opened on Feb. 1.

“I’m like the luxury vehicle of popcorn, that’s what I say about myself,” Redmon said.

When you look at the available choices, you’ll quickly discover that these aren’t Orville Redenbacher’s classic flavors. 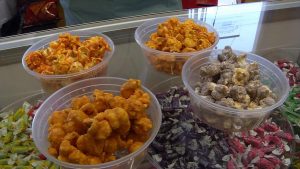 Some of the popcorn sold by Zack Redmon in New Hope.

“So this is the hot barbecue,” Redmon said, plopping a large plastic bin onto the counter. “This is my signature flavor, and you can see the bin is getting kind of low.”

Redmon is a product of Hennepin Tech’s culinary program, and he’s concocted dozens of popcorn flavors like strawberry wafer, Butterfinger, and puppy chow, to name a few.

“I love seeing people’s reaction,” Redmon said. “Like when they try popcorn they’re like, ‘ooh, I didn’t think that would work.’ And they’re like, ‘how’d you do it?’ And I was just like, I can’t tell you. That’s my little secret.”

It’s a hobby that started during the holidays when he made popcorn for family members.

“I look at popcorn as a palette,” Redmon said. “Like a blank palette. I can make it taste like anything.”

Redmon’s family liked the popcorn so much they convinced him to start selling it. For a while, he did just that, out of the trunk of his car. 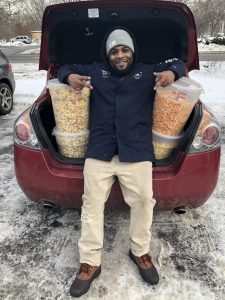 Before opening a shop, Zack Redmon sold popcorn out of the trunk of his car.

“I didn’t have enough space [in the car], and I wanted to be more professional too,” Redmon said.

Now he has an office suite in New Hope, with a customer base that grows by the day.

“Oh the banana pudding, I’ve never had anything quite like that with popcorn,” said Dacia Durham, a customer from Minneapolis. “So that was kind of a unique twist on what he’s doing.”

“The banana pudding, whichever one, I’m addicted,” Anderson said. “And I got everybody in my family addicted to it. I even drive to Park Rapids to deliver it to my mom.”

All great businesses have to start somewhere, and if the positive reviews keep coming in, Redmon is hopeful this culinary endeavor could lead to something big.

“That’s my end goal, is just to make me be the No. 1 popcorn shop in the state of Minnesota, one of the most unique popcorn shops in the world,” Redmon said. “That’s what I’m gonna say.”

“He’s going to blow up, because it’s really that good,” Anderson said.

Redmon’s Popcorn is open most days from noon to 5 p.m. For a list of hours, check out Zack Redmon’s facebook page.