A group of Brooklyn Park students spent time this week performing surgery on rather unconventional subjects.

Students from Rasmussen University‘s surgical technology class got to practice on pumpkins this week.

The students carved holes into the pumpkins and then used surgical instruments to gather as many seeds as they could into a plastic bag lodged inside of the orange squash. 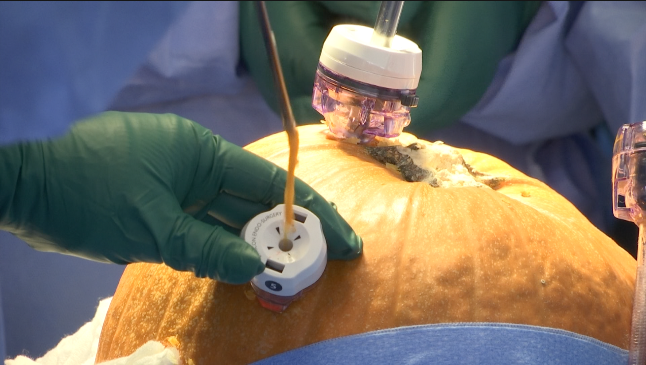 Rasmussen University students practiced using surgical tools on pumpkins this week to incorporate some Halloween fun into the classroom.

It’s a fun activity the class instructor puts together every year to train the next generation of surgical technicians.

“It’s a great team building exercise, said Krista Vylasek, the program coordinator of Rasmussen’s surgical technology program. “It helps with depth perception. They get some practice using some of the laparoscopic instruments, and that camera control.”

This is the fifth year the Rasmussen students have performed surgery on pumpkins. Vylasek officially calls the exercise “microscopic pumpkin seed-ectomies.”