From the outside, a new building located along Highway 610 in Brooklyn Park looks like an office.

But on the inside, it’s the new home of Rasmussen University, where future nurses, surgical technicians and physical therapists will learn how to treat patients.

“So in this room right now, we have four mannequins,” said Matt McIntosh, the campus director, referring to the ‘skills lab.’ “So our students have the ability to do skill testing on mannequins, versus live people, until they get their skills refined and are much more confident when they go off to clinicals and start working with actual patients themselves too.”

Construction on this new, 40,000 square foot building finished earlier this summer and merges Rasmussen’s former campuses in Blaine and Brooklyn Park all under one roof. 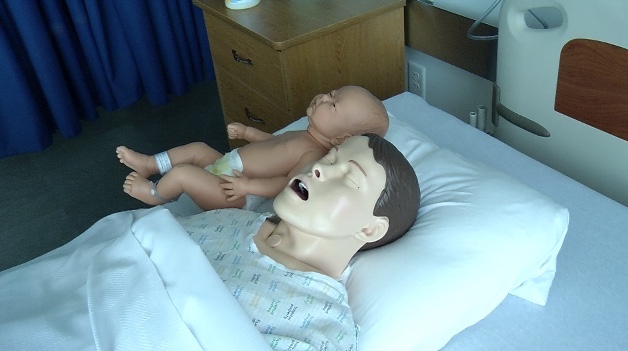 Examples of the mannequins used in the curriculum at Rasmussen University in Brooklyn Park.

“As those other buildings were starting to age a little bit, we decided that this was the best bet for the university, and of course our students and local community,” McIntosh said.

One of the key features of this building is the technology upgrades they’ve made to better serve their students.

Classroom desks come equipped with charging stations, and students have access to interactive mannequins in the various simulation rooms.

“So our faculty have the ability to program the mannequin to do various things and test the students on their knowledge and their ability to react to the various situations that are being thrown their way,” McIntosh said, referring to the mannequins in the simulation rooms.

It’s a level of technology that didn’t exist in their former buildings in the north metro; and it signifies an evolution for a school that was once known as the Rasmussen College School of Business.

The goal is that students enrolled at this new Brooklyn Park campus will go on to find success in the Twin Cities’ robust health care system.

“The feedback that we’re getting from students has been fantastic,” McIntosh said. “Really impressed with what we’ve been able to put in this building, and they feel like they have the equipment to be successful.”

Meanwhile, Rasmussen’s St. Cloud campus has a newly remodeled Nursing Skills & Simulation Labs, and Medical Assisting Lab. The public is invited to attend an open house to learn more about programs and teaching opportunities. Gift card drawings and food will be provided.