Near the intersection of 32nd and Independence Avenue in New Hope, the sight of boarded windows and debris scattered across the lawn of a home serves as evidence of what happened in the area late Tuesday night.

“Around 10:05-ish, I heard a car come down and it crashed straight into the house, and then our neighbor started screaming and the police came shortly after,” said a neighbor next door who didn’t want to be identified.

What the neighbor witnessed was the aftermath of a vehicle pursuit involving Crystal police that began on Douglas Drive when the officer spotted a car without a rear license plate. 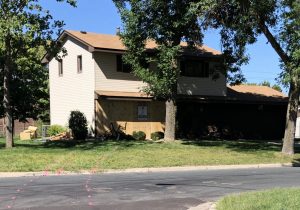 One day later, the home at 32nd and Independence is now boarded up.

“The officer illuminated the back of the vehicle to see if there was a temporary sticker or anything to indicate current registration,” said Crystal Deputy Police Chief Brian Hubbard. “They didn’t see anything, and so the vehicle turned onto 32nd Avenue. The officer attempted to perform a traffic stop to figure out what was going on with the registration of the vehicle and the vehicle subsequently took off.”

Investigators say the car was traveling up to 80 miles per hour. The driver lost control at 32nd and Independence and slammed right into the living room of a home, injuring one of the occupants in the process.

“We asked the police if they needed anything,” the neighbor said. “We got a tire jack and they grabbed a couple of these bricks, and they tried to lift the car up until the firefighters and everyone came.”

The paramedics took the homeowner to the hospital for treatment.

“This is not someone that we want running loose, doing criminal activity, wreaking havoc on this community,” Hubbard said. “And our obligation is to make sure that doesn’t happen.”

What happens next is up to the courts.

But for now, the neighbor is thankful that the car not only avoided her home, but that the homeowner escaped with just minor injuries.

“It could have happened to both of our houses, or one or the other, so we were pretty lucky,” the neighbor said. “We’re just glad that she’s okay.”