Brooklyn Center police are investigating two extreme cases of shots fired in Brooklyn Center, including one case where police recovered evidence of more than 130 rounds.

In that incident, police were called to the Sommerset Place Apartments off the 5300 block of Russell Avenue North. Police say a resident of the complex claimed responsibility for the shootings. They say a man told them he was “firing rounds with his family on July 4th.”

“Whenever you hear about a situation where there’s that many shells found in any community, it’s alarming,” he said. 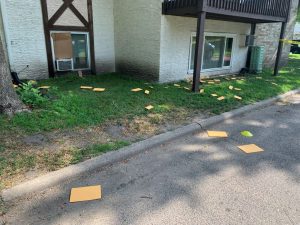 CCX News talked with several residents. They didn’t want to go on camera but said this is usually a quiet neighborhood, except on the Fourth of July.

A search warrant of the man’s apartment later recovered four firearms and dozens of rounds of ammunition. He was arrested and charges are pending.

Separate incident with evidence of more than 70 gun shots fired

No one was injured in either incident. Police say they are working on a comprehensive approach to the problem that will likely include increased patrols and other proactive measures.

“We’re definitely in communication with other law enforcement agencies around our community. This is a very challenging time for all the various law enforcement departments,” said Elliott.

According to CCX News records, the level of shots fired is something the city hasn’t seen in at least a decade.