Owners of electric vehicles will soon be able to charge their cars in Plymouth city parking lots.

This week, the Plymouth City Council approved an agreement with Carbon Solutions Group (CSG) to construct, own and operate 115 electric vehicle charging stations at a number of spots throughout the city.

Those locations include City Hall, the Plymouth Ice Center, the Station 73 park-and-ride lot, the Plymouth Community Center and several city parks. The agreement will be in place for 10 years with an opportunity to extend. 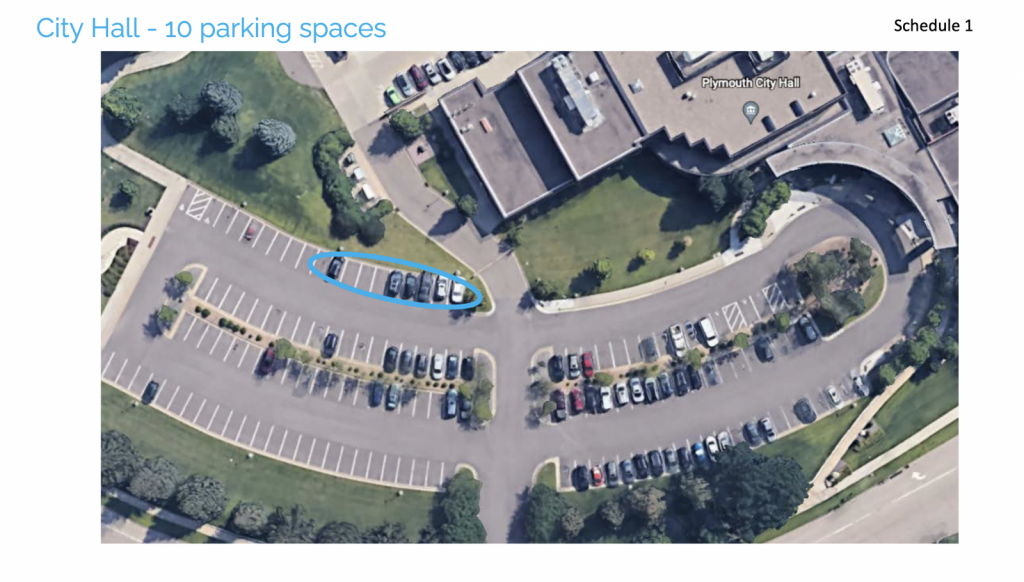 A rendering of where the charging stations would be at Plymouth City Hall.

Plymouth will receive $32,000 annually for the first five years of the agreement and $45,000 a year beginning in year six.

The total cost savings to the city over the next 10 years will amount to $2.4 million, officials said.

“I think it’s a good way to bring people to the city and to utilize and be part of the events that we do at all the parks,” said Amy Hanson, Plymouth’s Fleet and Facilities Manager. “I think when we have an event at the Northwest Greenway, knowing that they have an available charging station might make it a reason for them to say, ‘I want to go to that event.'”

Plymouth will also receive three electric vehicles at little cost to be used for replacing older vehicles within the city’s fleet.

Hanson says the city and CSG have a goal to implement some of the stations by the end of the year. The first site will more than likely be at the Plymouth Community Center.