In a neighborhood of east-central Plymouth, you’ll often see 71-year-old Michael Swanson out for a run.

“This is my favorite area, I’ll run around to French [Regional] Park, around there. Or I’ll go sometimes around Medicine Lake,” he said.

Running is how Swanson collects his thoughts and thinks about his next race.

“You spend a lot of time also thinking ‘when am I going to finish?’ said Swanson.

And finish he has. Swanson has completed 299 marathons – that’s 26.2 miles per race. He is currently preparing for No. 300 this Sunday, the Route 66 Marathon in Tulsa, Okla.

“It’s a way to see the country. We get to travel and meet friends,” explained Swanson on his love for races.

Swanson has completed marathons in all 50 states and is four states away from accomplishing the feat a second time. Marathons include The ET Full Moon marathon, held at midnight in Rachel, Nev; the Flying Pig Marathon in Cincinnati; and the Mercedes-Benz Marathon held in Birminham, Ala. He has also run the Grandma’s Marathon in Duluth 20 times and the Walt Disney World Marathon on 15 occasions.

Swanson says the Duluth race, held in June, is usually the hottest, while the Disney race held in Orlando is typically the coldest.

“That’s in January, it’s at 3 in the morning. It gets pretty cold,” said Swanson on the Disney event. 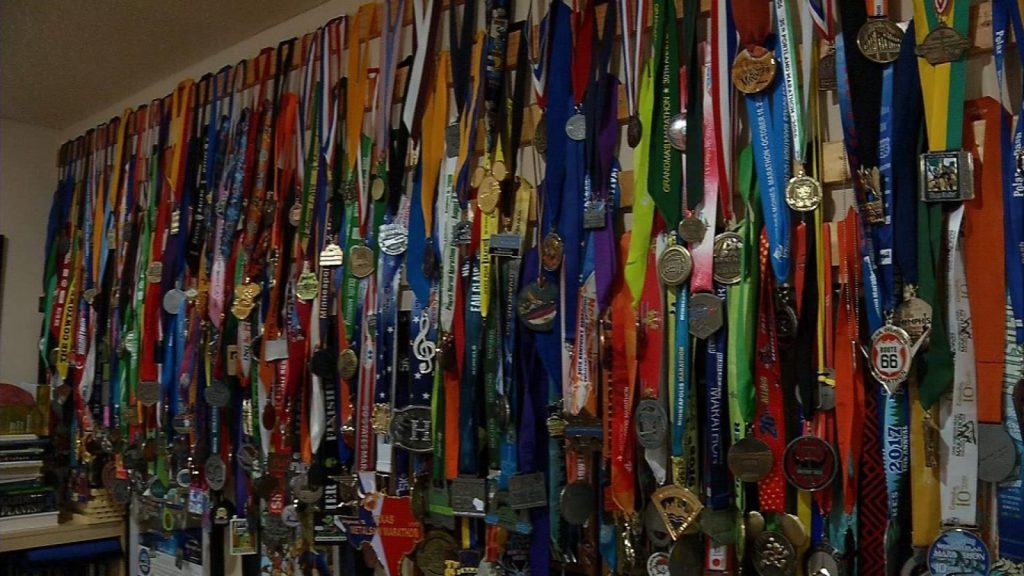 Swanson has a wall of medals for his marathons

Why running? Doctor gave him a choice

Swanson’s love of running is apparent, but it wasn’t always that way. He didn’t start until he was 46 years old.

“My doctor said you got two choices. You got to lose weight or you can just stop drinking beer. I said, ‘I’ll lose weight.'”

After signing up for a 5K, Swanson then coaxed his brother and a good friend into another 37 kilometers.

“In June they received a postcard in the mail saying you’re signed up for Twin Cities in 97. They’re like ‘what!'” recalled Swanson, laughing.

All the running has led to some meaningful moments, such as a 2007 marathon in Whidbey Island, Wash.

“That was where I did my 50th state,” said Swanson, who received a glass trophy for completing the feat.

When you have run this many races, you’re bound to run into someone who has run even more.

“A good friend, Larry Macon, he’s run more marathons than anybody in the country, if not the world, 2,300,” said Swanson.

Swanson rarely concerns himself with time. His fastest race was 3:58 at the Twin Cities Marathon in 1998. He focuses more on the event and the people he meets.

“It’s kind of fun. No matter where you go, I’m going to see somebody I know, somebody to talk to,” said Swanson. “Runners are the greatest people. They’re always pretty upbeat.”

And for all the miles, Swanson is thankful to have a special support along for the journey.

“My No. 1 supporter is my wife, Lynn,” he said. “I really appreciate everything she’s done and enabled me to do more marathons.” 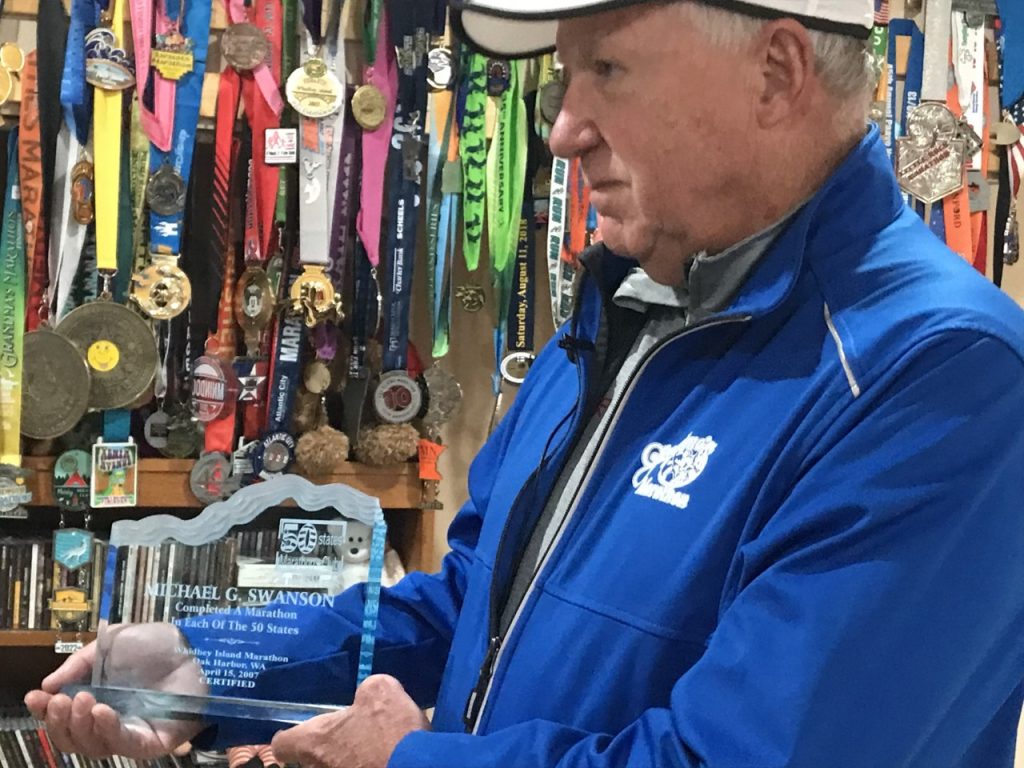 Swanson holds up the trophy for completing a marathon in all 50 states.