A developer wants to build a four story, 61-unit affordable apartment complex south of Highway 55, where the Plymouth Shopping Center used to be located. Residents are requesting changes be made to the proposal that better protect the nearby wetland. 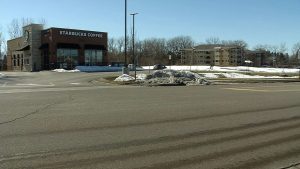 Lauren Lindelof, who lives near the proposed complex, is collecting signatures on a petition asking for more environmental precautions. The petition asks for a semi-permeable asphalt and for setbacks to be greater than 15 feet. It’s familiar territory for Lindelof, who petitioned when The Waters of Plymouth, a senior living complex, was built.

“We asked for an environmental assessment on that as well,” said Lindelof, pointing to The Waters of Plymouth. It broke ground in 2012, after the old Plymouth Shopping Center was torn down. “They met all of our demands and kept it 50 feet away from the wetland. That’s what we are asking here, that they keep it 50 feet away to give more of a buffer.”

So far Lindelof has gathered 70 signatures and she plans to hit 100 before turning the petition in to the city.

More about The Element

The proposal is for a four story, 61-unit affordable apartment complex called The Element. According to the written narrative submitted to the planning commission, the apartment homes will be a mix of 1, 2, and 3 bedroom homes with in-unit laundry, individually-controlled heating and cooling and private decks. It will be smoke-free and have a children’s play area, fitness room, underground garage, and an on-site manager. You can read a full description of the property here.

The complex would also be affordable housing. All incomes would be restricted to 60 percent or lower of area median income. A representative of the developer said four units would also be set aside for homeless veterans.

If all goes according to plan, construction would begin in the fall.

The planning commission recommended approval of the project. Listen to the full discussion here.

The proposal will go before the city council on March 24.