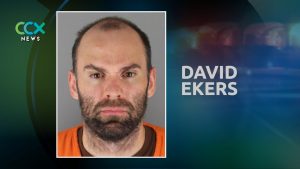 Officers received a call from Ekers’ father just before 5 p.m. of a domestic assault occurring at the residence. Upon arrival officers found Ekers’ mother, sister and grandmother with life-threatening injuries.

According to the criminal complaint, Ekers was taken into custody where he admitted that he tried to kill all three victims with a wrench. The complaint goes on to say that Ekers began by striking his sister five to six times in the head before going on to strike his grandmother and mother in the head multiple times.

The complaint says Ekers didn’t attack his father because he saw his father as an ally.

According to the complaint, Ekers has mental health issues and told officers he wanted to kill the victims because he did not want to be on medication or go back to the hospital.

The complaint says Ekers confirmed he planned to kill the victims one hour before the attack. Ekers’ grandmother had multiple skull fractures and bleeding. She was pronounced dead and the other two victims remain in critical condition.