The city of Plymouth faces an interesting question: should the city donate its aging fire truck to Ukraine? Or should the city try to sell it to decrease the burden on taxpayers?

The city has a 13-year-old ladder truck that has reached the end of its service life. According to city officials, its estimated value is $200,000.

Various nonprofit Rotary groups, including the Plymouth chapter, are working with other nonprofits, including U.S. Ambulances for Ukraine and the Ukrainian Resistance Foundation to provide assistance to the war-torn country. They recently asked Plymouth to consider donating the truck as part of a shipment of donated ambulances and fire engines expected to leave a U.S. port in late January or early February.

According to a letter from Rotary International, Plymouth’s 75-foot ladder truck No. 31 would be used for rescue operations due to Russian drone or cruise missile strikes at civilian targets causing building collapses.

“Unfortunately, the Russians have made it a point to target first responders during this war, destroying hundreds of pieces of emergency apparatus,” wrote Thomas Gump, member of Rotary International, in a letter to the city.

Plymouth City Council member Jim Davis wondered how long it could take before the Plymouth fire truck becomes a target should it be donated.

“Is this fire truck going to be a big, shiny target for Russian missiles? Will they lose it in the first week?” asked Davis.

“Mayor, members of council, I don’t think we can really determine what would happen in a war,” responded Amy Hanson, Plymouth’s fleet and facilities manager, who guided the donation presentation. 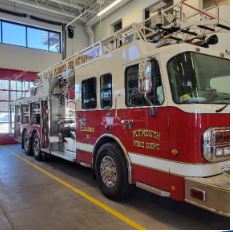 Plymouth city leaders emphasized at their Tuesday night meeting that they don’t mind helping a worthy cause. But they say they are also struggling with the financial ramifications.

While fire officials say the truck is no longer needed, the city wouldn’t be able to obtain any sale proceeds by donating it. Another issue: the city’s fleet replacement fund is currently underfunded. And that raises concern about the city keeping its current replacement schedule for fire engines.

To make up for that, Hanson said the city could extend its replacement schedule or adjust department allocations within future budgets.

Several Rotary representatives also spoke before the council on behalf of the project.

“I think this is a very good project with a very good probability of exactly the success that you’re expecting and not some other thing,” said Glen Norton, co-president of the Plymouth Rotary Club. “And so yes, it it a lot of money to donate $200,000 worth of equipment, but we all know what they’ve lost there. And it is very valued I’m sure.”

Donations of surplus equipment are not uncommon. According to a Rotary International representative, Brooklyn Park was recently asked for a fire truck being put out of service, but the city decided to donate it to Africa, instead of Ukraine.

Back in 2011, the city of Plymouth donated used playground equipment to Poland via the nonprofit Kids Around the World.

Mayor Wosje, who is a Plymouth Rotary Club member himself, suggested having the local Rotary group try to raise funds to make up for the financial loss of donating the fire truck. Other council members agreed with that idea.

The Plymouth City Council voted to table the donation decision to see if funds could be raised. A vote on the matter is expected in a month.