The Three Rivers Park District has started planning this month for a new north-south regional trail in the west metro. A north-south connection is rare for the area, as many other trails run east-west.

“People were really excited,” said Maggie Heurung, associate planner for the Three Rivers Park District. “The public, they were overwhelmingly giving feedback that they wanted a north-to-south regional trail.”

Heurung says the Eagle to Bryant Lake Regional Trail (EBLRT) would be 10-feet wide and support multiple uses including biking, running and in-line skating. It would also connect with French Regional Park in Plymouth.

It would also connect with popular trails including the following:

“People really wanted a trail that would be able to link them to those other trails and into existing parks,” said Heurung. 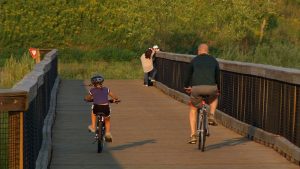 Other high-traffic areas including the Station 73 Park-and-Ride in Plymouth and Ridgedale Center would also be connected. Heurung says the ultimate goal is to have this north-south trail connect with the Elm Creek Park Reserve in the Maple Grove-Dayton area and the Carver County Regional Trail system in the southwest metro.

A study for possible trail connections in the west metro started in the fall of 2017. The study, which concluded last spring, included community feedback that put together the preliminary trail alignment.

Public input on the trail continues, says Heurung. Planning for the project is expected to wrap up next spring. Funding still needs to be approved.

A project website with background information and links to an online survey and interactive mapping tool will be developed to encourage feedback from the public. For more information visit LetsTalkThreeRivers.org.