A recent visit to Albertville was special for Chelsea Lucas. Rather than spending the day at her Brooklyn Park group home, she got to spend some valuable one-on-one time at the home of her twin sister, Nicole.

However, Nicole is more than just a sister. Chelsea is dependent on her for many facets of life.

“[Chelsea] has chromosome abnormalities, so she’s deaf, she’s nonverbal,” Nicole Lucas said. “She can say one syllable words. And she has autism and epilepsy, so she’s got a whole lot of things.”

While this quality time between the two sisters is nice, ideally, Chelsea would be taking part in a day program where she could work and socialize with others. That’s what she did before the pandemic hit.

“She went five days a week, 9-2 or something like that,” Nicole said of Chelsea’s day program. “She had friends there.”

In March of 2020, Chelsea’s day program shut down and due to staffing shortages, she hasn’t been able to resume those pre-COVID activities.

Two years without that outlet have taken a physical and emotional toll.

“I mean, it’s a constant struggle,” Nicole said. “I feel like, she’s just kind of existing in between my visits.” 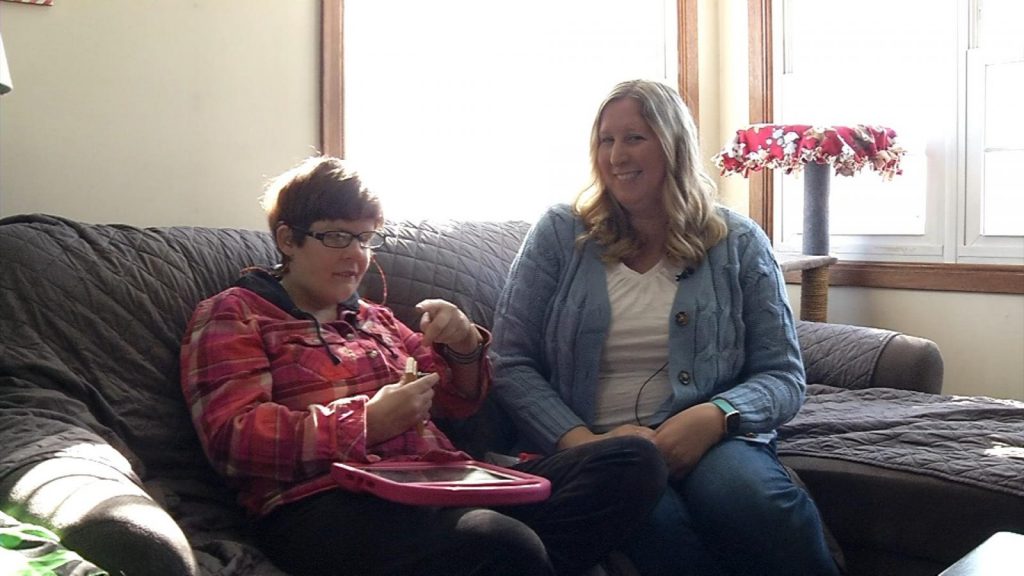 Chelsea Lucas (left), does an activity with her sister, Nicole.

“I can certainly understand her frustrations and her desperation,” said Bill Schultz, president and CEO of Opportunity Partners, which is a nonprofit that provides day programs for people with disabilities.

Chelsea is on a waiting list to get into one of its programs, along with 400 other people.

The list is so long because Opportunity Partners has 80 open staffing positions.

“They’re the lifeblood of our mission, where we support adults with intellectual and developmental disabilities,” Schultz said of their staff members. “Without them, we can’t deliver our mission and support people in the community. So really to provide those services to the community, we need the help from our legislators.”

The wages for those positions are dictated by the state. Most of the jobs pay between $15 and $16 an hour, making it hard to be competitive in a tight labor market.

“Oftentimes people with disabilities are invisible to the community and it can be a forgotten group, and there’s so many competing voices for the surplus that’s out there,” Schultz said.

It’s why Nicole is trying to be a voice for Chelsea, to help her get back to the life she had before the programs shut down.

“I hope that people who have the ability to make change don’t forget them and work hard at bringing it back,” Nicole said.