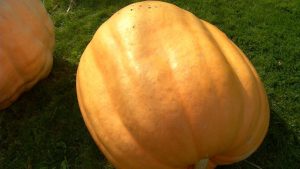 “Living in this neighborhood is just amazing. There’s a great sense of community,” says Lother. “The pumpkins are just an accessory to all of that.”

Instead of having a big festival to weigh pumpkins, a group of neighbors went around to weigh different pumpkins, which topped out at hundreds of pounds.

“In 1997, we weighed five or six pumpkins,” remembered Callista Abide, the neighborhood historian. “Now the pumpkins are 500 or 6000 pounds and it’s super fun to see how big people’s pumpkins can get. And just get together.”

The pumpkins even have names, like a nod to 2020, “Corona Deville.”