Osseo police now have a new tool to help officers respond to scenarios without having to use lethal force.

They fire beanbag projectiles tucked inside a shell that look similar to rolled-up socks. 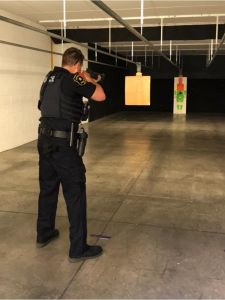 An Osseo police officer trains with one of the Mossberg pump action shotguns.

In the past, Osseo police had Tasers, but they didn’t have any less-lethal options that could shoot farther distances.

Osseo Police Chief Shane Mikkelson says all of the officers have been trained on how to use the guns, and the goal is to aim for areas such as outer limbs.

The plan is to use them in more in what he describes as “static” situations. One such example would be is if a suspect with a knife is surrounded in the street and isn’t complying with officers’ commands to drop the weapon.