Now in Theaters: New Movies for the First Time Since March

For the first time in five months, moviegoers who enjoy the in-theater experience now have several new films, such as “The New Mutants” from 20th Century Studios, to see on the big screen.

“I love movies. First time I’ve seen one since March,” said Robert Myran of Robbinsdale, who went to Emagine Willow Creek in Plymouth to see “The New Mutants.” “I’m looking forward to this, yeah.” 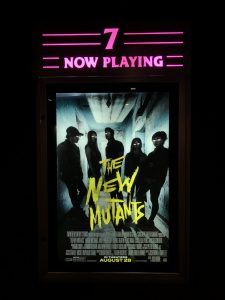 The New Mutants is one of several new films playing at Emagine Willow Creek this weekend.

“This is huge for us,” said Jake Mueller, director of operations for Emagine Entertainment. “I can’t tell you how much we appreciate the producers, the studios, the directors that have stood with us.”

Emagine Willow Creek reopened in June with enhanced cleaning and safety protocols. That includes limiting the seating capacity in their auditoriums to help prevent the spread of COVID-19.

Mueller described it as being in “survival mode.”

“It’s not as bad as being shut down, but only slightly better than that,” he said.

Hollywood hit the pause button on its big blockbuster releases this summer, so for the past two months, theaters had to show classics like “Jurassic Park” until the studios reversed course this past week.

“With 50 percent of the theaters open now, there’s an opportunity for them to start making a little bit of money and helping us out at the same time,” Mueller said.

With most of the major theater chains open, Mueller says he expects new releases to be continuous over the coming months and leading up to the holidays.

Now they just need moviegoers like Robert Myran to come out and see these films.

“I think it’s safe,” Myran said of coming back to a theater. “We’re wearing our mask. I won’t sit by anybody. I’ll be socially distant.””

Comments like that, along with the enhanced safety measures, have theater staff members optimistic about what’s to come.

“There’s a light at the end of the tunnel,” Mueller said. “We’re hopeful that we’re gonna pull out of survival mode and eventually start to get into some semblance of recovery.”

The next major milestone for movie theaters is the opening of the $200 million blockbuster, “Tenet.” That officially opens on Sept. 3., and while auditoriums won’t be jam packed due to state mandates, theaters hope the film brings a number of moviegoers back