Not Seeking Re-election, Opat to Leave County Board Early

Mike Opat, the Hennepin County commissioner representing District 1 for nearly three decades, will leave his county board seat two months before the end of his current term. Opat did not seek re-election this year. He will leave the county board Nov. 7.

“It has been an honor beyond description to work for and serve the residents of District 1 and all of Hennepin County,” said Opat. “I’m excited to move on to a new challenge.”

The candidates seeking to replace Opat are Brooklyn Park Mayor Jeff Lunde and De’Vonna Pittman, who is employed by Hennepin County to work on efforts to reduce disparities.

Remembered as ‘Architect’ for Target Field

Before he was a county commissioner, Opat began work in Hennepin County in 1981 walking cell blocks as a correctional officer. Opat, who holds a public policy degree from Harvard, went on to play a pivotal on the county board after his election in 1992. He was elected by his colleagues to chair the county board nine times.

During his 28 years on the board, Opat helped advance numerous infrastructure projects. He led the charge to accelerate improvements to Highway 100 through the northern suburbs by building a coalition of local elected leaders. He also advanced the county’s investments in the Midtown and Humboldt greenways.

But perhaps the project that garnered him the most attention was the opening of Target Field. To make the Minnesota Twins baseball home happen, Opat became widely known as the “the architect” of Hennepin County’s public-private partnership with the Twins that provided for the design, construction and long-term operation of the baseball stadium. To this day, the sales tax that helped fund the stadium also has had an enormous impact on youth sports. The tax provided youth sports grants to build or repair youth sports facilities. 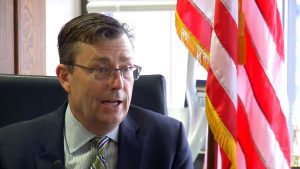 Mike Opat in a prior interview with CCX News

One project that Opat tried to make happen was the Bottineau LRT line. However, BNSF Railway Co. wouldn’t budget on negotiations to share eight miles of its railroad corridor needed for the proposed light rail route. Efforts are now underway to come up with an alternative route.

According to a press release from the county, Opat will begin a consulting practice, working initially with Robbinsdale-based North Memorial Health.

“Not for one day have I thought anything but that the county is a wonderful employer with truly dedicated employees,” said Opat in the release. “I’m eternally grateful for the many talented leaders with whom I’ve had the chance to work over so many years.”