The communities impacted by the route options remain the same with one exception: Golden Valley would be left out. Instead, track would go through north Minneapolis from Target Field.

The route would also continue to go through Robbinsdale and Crystal. But instead of sharing space next to existing BNSF Railway track, the rail line would be put on County Road 81. The Brooklyn Park portion of the route is expected to remain the same. 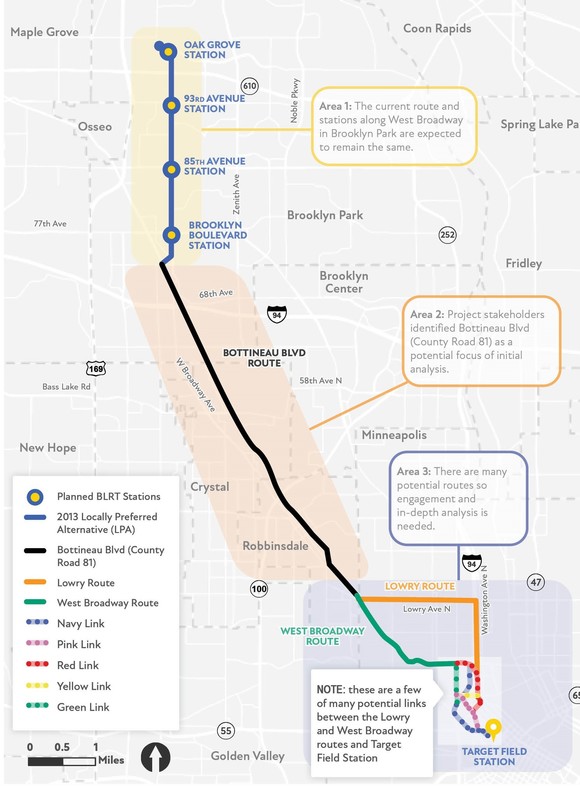 Previous Route Abandoned Due to Lack of Agreement with BNSF

The Met Council and Hennepin County abandoned the previous route last August that would have shared space next to BNSF Railway track. Negotiations never got anywhere with the railway, forcing project leaders and community stakeholders to seek new options.

“The new direction of the Blue Line Extension is positioned to serve among the most racially and economically diverse communities in Hennepin, while also connecting transit-reliant residents to the broader regional transit system,” said Irene Fernando, Hennepin County commissioner who represents District 2, which includes Plymouth and Golden Valley, as well as north Minneapolis. “This will change the trajectory of what’s possible for so many of our neighbors – connecting students to education, patients to health care, and workers to jobs.”

The north Minneapolis portion of the route could either go on Lowry Avenue or West Broadway. Four different route options would link to Lowry or West Broadway from Target Field.

Project leaders will hold virtual town hall meetings to gather input starting March 25. A community survey is also available on the project website for residents to give feedback by April 30.