A new invasive bug has showed up in Minnesota. The Minnesota Department of Agriculture says the lily leaf beetle is native to Europe and Asia, but is an unwanted import to the United States and Canada. Until now, the lily-destroying bug has been in the northeastern U.S., as well as Washington State and Wisconsin. But now, it’s also been spotted in St. Paul.

“This insect is a major concern for gardeners and homeowners with lilies,” says Angie Ambourn of the Department of Agriculture’s pest detection unit.

Ambourn says both the larvae and adults eat holes in lilies. The larvae cause the most havoc. Ambourn says they can completely strip plants of their leaves and flowers. Their favorite plants are true lilies, so your day lilies, calla lilies, and canna lilies are safe, she said. The adult pests will also sometimes eat hollyhocks, potato, hostas, and a few other plants.

Adults are easy to spot – they’re bright red with black legs and antennae. 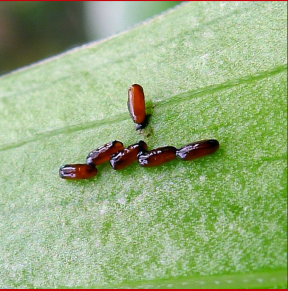 The invasive insects will lay red eggs in lines underneath leaves, where you’ll also find lumpy larvae. MDA says the larvae cover themselves in their own feces, probably as protection from predators. 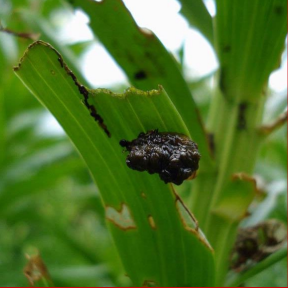 Lily leaf beetle larva covered in its own waste

MDA is still looking into how widespread the beetle is in the state. If you spot it in your garden they’d like you to report it following the instructions on this website. The beetle’s appearance in Minnesota is so new that MDA is referring people to the University of Wisconsin’s Extension Service for tips on how to eradicate it. You can find that information here.