MnDOT will also close many interstate highways near downtown Minneapolis at 7 p.m. on Saturday including the following:

The Hy-Vee in Robbinsdale is just one example of the trickle-down effect caused by days of riots and successive fires in Minneapolis and beyond. The destruction follows the death of George Floyd, a black man who died in an encounter with a white Minneapolis police officer. 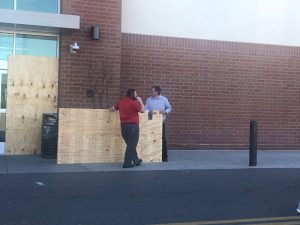 CCX News reporter Sonya Goins says the Robbinsdale store was jam-packed with people trying to get groceries. One reason is fires damaged their stores in Minneapolis. Another reason for the busy day is the store is closing earlier than usual for safety reasons. Windows were being boarded up and the store closing at 6 p.m.

The Minnesota National Guard will be fully deployed for first time since WWII to combat another potential night of looting and destruction. Besides Minneapolis and St. Paul, cities across the northwest suburbs have enacted curfews.

“Don’t go out of your homes, don’t make this more difficult,” said Walz at a 6:30 p.m. press conference on Saturday.

Gov. Tim Walz at a press conference Saturday morning said the violence and damage in Minneapolis Friday night and early Saturday was caused by about 20 percent Minnesotans and 80 percent outside. However reviews of Hennepin County jail records show an ample number of Minnesotans arrested early Saturday for probable cause riot. Many of the arrested have either Minneapolis addresses or cities in the metro area. One of the arrested for riot was a 20-year-old Brooklyn Park woman.

Early Saturday at a press conference, Walz mentioned unconfirmed reports that “outside agitators” could be connected to the violence, possibly organized anarchists or white supremacists. To be clear, it’s possible many from those outside groups may have escaped apprehension. The Department of Public Safety continues to analyze arrest data to make connections and links, Public Safety Commissioner John Harrington said.