Every day, the Brooklyn Center Transit Center bustles with activity. But since the pandemic hit, things haven’t been quite the same on Metro Transit buses.

“You have to be six feet apart. Wear your mask. It’s fine,” said Elaine Vining, a bus rider from Minneapolis.

“When you walk into the door, the guy tells you, ‘oh you need a mask,'” said Melvin Tarr, a bus rider from Blaine. “So basically everybody has a mask on and everybody sits, like, apart from each other.”

Wearing a mask and social distancing are just a couple of the changes Metro Transit has implemented since COVID-19 hit.

“This pandemic had an immediate impact on our operations here at Metro Transit,” said Drew Kerr, spokesperson for Metro Transit. “We decided to pare back our service, ask customers to wear face masks whenever they rode, and we’ve also been cleaning and disinfecting to a degree that we have never seen before.”

On top of that, back in March, Metro Transit asked riders to board through the back of the bus and pay their fares in advance, rather than using the fare box on-board.

“The fare box is within feet of the driver and a lot of times people will spend time putting in cash or coins, or having some sort of discussion at the fare box,” Kerr said.

But that was then.

As of Aug. 1, Metro Transit reinstated front-door boarding thanks to an ongoing effort to create a safer environment on its buses.

One of the reasons that Metro Transit was able to resume front-door boarding is because it installed plastic shields on nearly every bus. Those shields provide a barrier between the driver and the passengers who board. 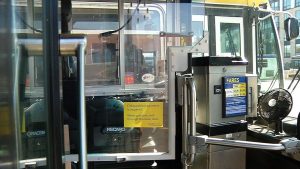 An example of a plastic shield Metro Transit installed on its buses to protect drivers.

“All of our frontline staff are putting themselves, at some degree, on the front lines of this pandemic, as people in lots of other industries are,” Kerr said. “We really have to tip our hats to them for showing up every single day and doing this really tough job.”

In the next couple weeks, people will start seeing more buses on the road. Starting Sept. 1, Metro Transit plans to increase its service back to about the same level as before the pandemic began.

Going forward, Metro Transit officials just ask that passengers do their part to protect themselves and the people around them.

“This is a partnership,” Kerr said. “And we need their partnership, and we hope that they will continue to help us as we move forward.”