Testimony resumed Monday in the trial of former Brooklyn Center police officer Kim Potter, who fatally shot Daunte Wright on April 11 during a traffic stop. The testimony included information from an assistant Hennepin County Medical Examiner, a forensic scientist and agents from the Bureau of Criminal Apprehension.

During afternoon testimony, prosecutors called to the witness stand agents from the Bureau of Criminal Apprehension. One of the agents, Sam McGinnis, was tasked with collecting equipment from officer Potter, including her duty belt and service weapon used on the day of the shooting. McGinnis also collected Brooklyn Center Police Department documents, including Potter’s work shifts prior to the shooting.

According to court testimony, Potter worked 10 shifts between March 26 and April 11. Prior to each of those shifts, Potter was required to perform a “spark test” to make sure her new Taser 7 was working properly. Brooklyn Center police had purchased the Taser 7 model in March.

McGinnis, a firearms instructor, also demonstrated to the jury how Potter’s Taser worked. He said Potter would have had to “flip a safety switch” to use her Taser. During questioning, McGinnis also described how Potter would have had to “unsnap” her Glock service weapon from her holster, which was on her dominant right-hand side. The Taser was positioned on Potter’s left-hand side.

Potter’s Taser seen on left, her service weapon on the right.

Potter says she mistakenly used her gun instead of her Taser when she shouted at Wright, “I’ll tase you!”

Upon further questioning from the state, McGinnis noted differences between Potter’s Taser and her firearm. McGinnis said Potter’s loaded firearm weighed 2.1 pounds, while her Taser weighed 0.94 pounds. Potter’s Taser has yellow color on it, but it’s top and handle both black color, same as the firearm. He also explained differences in texture of each weapon. McGinnis also showed to the jury how the Taser has a laser and LED lights when it’s activated before firing, technology Potter’s Glock does not have.

During cross-examination by the defense, McGinnis was asked whether he was familiar with all the testing practices of Brooklyn Center officers.

Hennepin County District Court Judge Regina Chu, who is presiding over the case, adjourned for the day just after 3:45 p.m. when the state had no further witnesses scheduled for Monday. Testimony resumes at 9 a.m. Tuesday. Chu said the trial is proceeding “on schedule.” 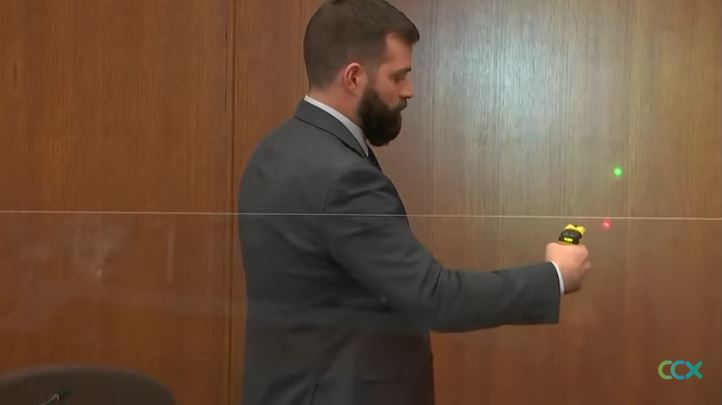 On Monday morning, Assistant Hennepin County Medical Examiner Dr. Lorren Jackson testified that Wright could not have survived injuries sustained in the shooting.

“With respect to timing, was this gunshot wound, the injuries you’ve observed through the heart and the lung, was that a survivable injury?” asked prosecutor Erin Eldridge.

“As a forensic pathologist, I would say no,” said Dr. Jackson, who has conducted more than 1,800 autopsies.

The prosecution presented photos of autopsy exhibits before the jurors. The photos were not livestreamed out of respect for the deceased.

According to Jackson, Wright died of a gunshot wound to the chest. Wright was shot in the lower left side of his chest, with the bullet crossing areas of the left lung, heart and right lung, Jackson said.

“The majority of the injury was to the heart,” said Dr. Jackson, mentioning it would have taken seconds to minutes to die from the injuries sustained.

Jackson said more than three liters of blood were found in Wright’s chest.

“That’s significant because an individual of Mr. Wright’s size would have approximately 4.5 to 5.5 liters of blood in his entire body. And when you lose half of that rapidly, you’re condition becomes critical,” he said.

Jackson said toxicology testing was also done on Wright’s body which looks for hundreds of types of drugs. Cannabinoids were the only ones found, consistent with marijuana usage.

“It’s on the high end of numbers I see,” said Dr. Jackson describing the level of toxicity during cross-examination by the defense.

The examiner said the level of THC had no level of importance to the cause of Wright’s death.

Potter is charged with first- and second-degree manslaughter. The 26-year police veteran said she mistakenly used her firearm instead of her Taser when she fired a single shot. Prosecutors are arguing that Potter was “reckless” and acted “negligent” during the stop. 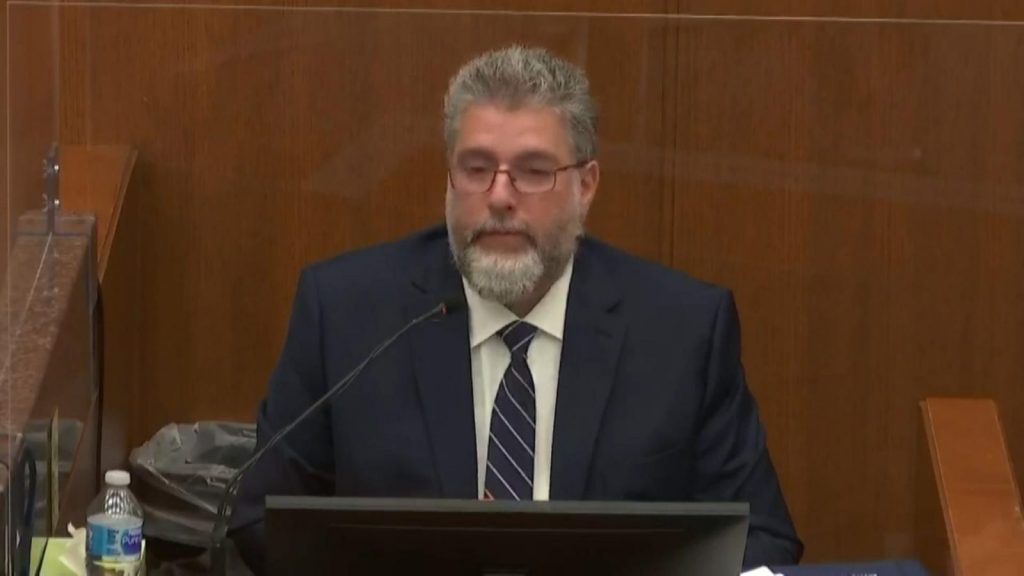 On Friday, jurors heard from former Brooklyn Center police Sgt. Mychal Johnson, who responded to the passenger side of Wright’s vehicle. He was among three Brooklyn Center officers at the traffic stop. Officer Anthony Luckey and Potter were the others.

Wright had broken away from officer Luckey during an arrest attempt when Johnson reached for the gear shift to try and prevent Wright from driving away. That’s when Johnson heard Potter yell “Taser!, Taser! Taser!”

Asked Potter’s defense attorney Earl Gray, “If an officer in your position, officer Potter, trying to stop him from resisting with you and resisting Luckey, would it be fair for that officer to use a firearm to stop him?”

Before the shooting officers had learned Wright was wanted on an outstanding warrant for illegal gun possession. Wright also had a restraining order filed against him by an undisclosed woman. Alayna Albrecht-Payton, who was in the passenger seat at the time of the shooting, testified she was not the woman who filed the restraining order. Albrect-Payton said she had known Wright for about two to three weeks.

During the cross-examination phase, Johnson responded “yes” when asked if he considered Potter “a good co-worker.”

Johnson, who now works as a patrol major for the Goodhue County Sheriff’s Office, also said Potter had never received a complaint of excessive force during her time with the Brooklyn Center Police Department.