One of the last Maple Grove apartment projects to make its way through the application process before the city council approved a one-year moratorium on multifamily residential developments has been tabled until July.

The developer, Trek Real Estate and Development, proposes a mix of attached townhomes, detached villas and a 4-story, 208-unit multifamily apartment building in the northwest part of the city south of the Elm Creek Park Reserve. The precise location is two sites along Territorial Road north of County Road 81 and Highway 610 and east of Fernbrook Lane. The development, known as Territorial Greens, has city backing. But it’s being held up while the city awaits a resolution on traffic control from Hennepin County.

The Maple Grove City Council tabled the project at its June 15 meeting after previously tabling it in May. The council needs to make a decision at its next meeting July 20 as its running up against a 120-day statutory window to vote on development projects. 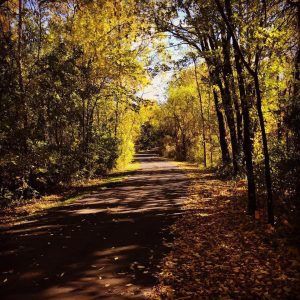 Some residents submitted emails to the city speaking out against the project. One resident wrote that the Territorial Greens proposal is “too big of development for the area in its current state.” Others expressed traffic concerns that such a sizable development would bring. A townhome association to the west of the site called Territorial Woods says the project would disrupt the character of the neighborhood.

“Those residents right now are so used to looking out on a beautiful wooded lot,” said William Gallagher, spokesperson for the Territorial Woods Homeowners Association. “With this development that is gone.”

Beth Hustad, president and CEO of Trek Real Estate, says landscaping will be done to ease the transition with the neighbors.

During a roughly 50-minute discussion on the project Monday, June 15, a brunt of the project focused on traffic, largely at the intersection at Territorial Road and Fernbrook Lane. While an analysis found existing traffic would not warrant any traffic control device at this intersection, once the development is complete, something would be needed. Hennepin County is involved because it has jurisdiction over Fernbrook Lane. 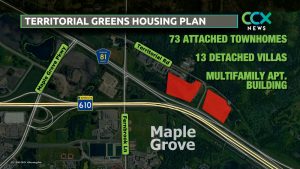 Ken Ashfeld, Maple Grove city engineer, said the county did commit to eventually install a traffic light. But that won’t happen until the development is finished. That led to further study of a roundabout.

Ashfeld pointed to a nearby mini-roundabout recently installed at Territorial Road and Brockton Lane/County Road 101, which MnDOT and Hennepin County worked together on. “It seems to be working quite well,” said Ashfeld.

The benefit of a mini-roundabout is it could be installed during project construction and it costs about the same as a traffic signal, said Ashfeld.

“I like the idea because the two biggest complaints that I heard from the people I spoke with is trying to make a left turn from Territorial to go south on Fernbrook, because trying to beat the traffic from both sides, and the speed of the traffic coming southbound,” said Maple Grove City Council member Phil Leith. “So the roundabout kind of takes care of both situations.”

While the city focused on traffic, the attorney representing the buyer of the development didn’t believe the discussion was relevant.

“I have to emphasize to you, yet again, as I have stated in both of my letters, that under your ordinances, you have no authority to disapprove the development stage plans based on traffic,” said Greg Soule, attorney for the buyer.

Hustad with Trek Real Estate added it’s unlikely the apartment building will be ready for occupants until late 2021. Further delays, she said, could undue the project.

The city council sought feedback on Soule’s comment. Justin Templin, attorney representing the city, said the traffic discussion is legally relevant because the developer is requesting an amendment to the overall concept plan.

Because the Maple Grove City Council is closing in on its 120-day review window, it will have to make a decision on the project at its July 20 meeting. City officials feel the extra time will allow them to get assurances from Hennepin County on the roundabout plan.

“I think it’s a great solution for this location,” Maple Grove City Administrator Heidi Nelson told CCX Media about the roundabout during an interview with CCX’s Dave Kiser.