The Maple Grove City Council has approved a five-story senior housing project that would be taller than other building in The Village at Arbor Lakes area.

The city council gave unanimous approval May 4 to a concept stage plan amendment, allowing the project to proceed. The approval came despite some concerns about senior residents being “clustered together” in light of the current COVID-19 pandemic.

“Now, wonder how people will feel about people being clustered together like that,” said Kristy Barnett, a Maple Grove City Council member. “That just makes me a little nervous.”

Bloomington-based Doran Cos., the developer behind the project, says there’s a still a great demand for senior housing.

“During these COVID-19 times, there’s actually been an increased interest primarily in independent living,” said Tony Kuechle, president of development for Doran Cos. “As people have to shelter in place for extended periods of time, they’d rather actually be in a building where there’s neighbors and services than actually being housed up in their own, independent homes.”

The Doran plan also calls for a pair of 6,500-square-foot commercial buildings that could be for possible restaurants or retail. The developer notes there’s also interest from a veterinarian or dental clinic. 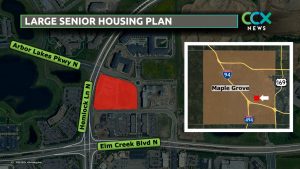 The senior project calls for 198 units and would be be situated at the southeast corner of Hemlock Lane North and Arbor Lake Parkway. The five-story building would be taller than anything else in the area. Nearby hotels and apartments are four stories.

“We really see this enhanced landscaped five-story building on this corner as creating kind of an iconic entrance into this area,” said Kuechle.

According to Kuechle, 117 of the units would be independent living, 59 for assisted living and 22 for memory care. The project is a significant departure from an earlier proposal that called for a three-story office building. Kuechle says the demand for office has dropped significantly.

“I think demand is going to diminish even more in the future,” said Kuechle.

Maple Grove City Council member Karen Jaeger asked if there would be a plan “B” if demand for senior housing drops. Doran Cos. doesn’t believe that to be the case.

“We don’t see a need to actually decrease the size of the building,” said Kuechle. “We actually see increased demand going for probably for the next 11 years.”

A market study done by the developer shows continued demand in Maple Grove for senior housing. The number of seniors 60 and above is expected to rise until 2024, the study found. The age 75-to-79 population will have the greatest growth as baby boomers turn 75 in 2021. The study also notes that the age group 75 and over is projected to grow by 32 percent, an addition of 2,862 older seniors by 2024.

Maple Grove City Council member Phil Leith says the city has talked about this site for the last 10 years. Leith says he doesn’t want to wait many more years for an office project to come to fruition.

“We obviously thought this would be a great site for a tall office building, but I think the reality is as we’ve seen, hasn’t played out,” said Leith. “I think due to the current situation and more and more people work at home, I think the demand for office, as stated earlier, is going to go down.”

While the Doran project will be allowed to proceed, the Maple Grove City Council approved a one-year moratorium for new multifamily residential projects. The moratorium only affects future applications, not projects already under review or submitted. It would impact projects of five or more units with shared entry.

According to Joe Hogeboom, the city’s community development director, the moratorium will allow the city to study whether the city has reached a saturation point on apartments. It would also allow the city to look at maintenance issues due to aging housing, he said.

There are currently 4,000 apartment units in Maple Grove, 15 percent of its housing stock, Hogeboom said. He also said there are more than 2,000 apartments in various states of the approval process.

As for the Doran project, construction isn’t expected until next spring and still needs further design approvals.