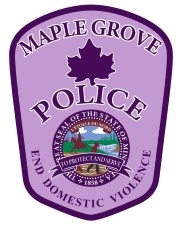 The purple patches were sold at the Maple Grove Police Station for $10. Proceeds benefited Maria’s Voice.

“The reason why the purple patch initiative was created and why we chose Maria’s Voice was because of the relationship we have with all of you and it was so close to our community and so close to our police department,” said Sgt. Matt Brost from Maple Grove Police. Brost spearheaded the initiative. “So, it just made sense.”

In the spring of 2020, Maria Pew died at the hands of her husband in Maple Grove. Since then, her family founded Maria’s Voice to work to prevent domestic violence through several initiatives.